But there’s another “space” targeting the long tail of the social networking crowd — those who have a burning fashion itch to scratch.

Fashionspace, a UK-based company, is a social network for fashion designers and fashion lovers to buy, swap, sell and network (screenshot below). Users can open up a personalized online shop, which is free to set up and free to list items for sale. 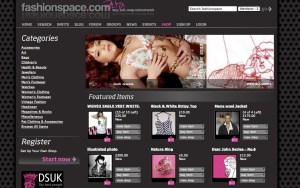 Members on the site can peruse profiles (see screenshot below) and stores of members according to expertise, e.g. photographer, designer, make-up artist, etc. The website also has general fashion news, blogs, events, and forums where members can connect and share experiences. Fashionspace will take a small cut on each sale while users can pay via paypal, as well as major credit cards like Visa and Mastercard.

The idea was sprouted by Holly Bellm, who studied fashion styling and make-up at the London College of Fashion. After having noticed how MySpace was quickly becoming the new platform for finding new talent in the music industry, she decided to replicate the same effect for Fashion. While with MySpace the focus for artists was on distributing music to fans and the like, while maybe being scouted by A&R for indie and major labels, fashion designers would create their own personal boutique and showcase to scouts and buyers alike.

Bellm says she’s heard several stories from designers who’ve noticed increased awareness of their brands and many are being approached by retailers and buyers online, as well as offline. And while Fashionspace is specifically targeting the boutique element of independent designers and creative types who are selling designs and attracting interest from fashion agents, Bellm says Fashionspaec is consumer facing as well, where anyone can buy goods and search through non-private profiles.

And she’s not alone — Bellm met her co-founder, Harry Bridgeman, via mutual friends at a party, and the duo spent significant time together in 2006. Bridgeman, who then worked at a marketing agency in London, helped Bellm develop the business plan — in the midst of a job transition to an investment management company — and later joined with Bellm full-time on Fashionspace.

Bridgeman runs the operations and business administration, while Bellm is the creative, marketing, and PR half. Without the technical skills necessary to execute the vision, the pair outsourced the design and development to Large Design, a London-based development house.

Fashionspace, launched last October, has seen a fair bit of traction for a very specific niche; recording 22,000 users, 800,000 monthly page views, and 50,000 unique visitors, although Bellm says the company has spent very little on marketing, instead choosing for the site to go full featured before a big marketing spree.

For an initial push to attract designers, Bellm and Bridgeman attended Graduate Fashion Week in London in order to build a network of emerging designers who could upload credible content, which also gave Fashionspace much needed news coverage.

While sites like Stylemob, Stylehive, and others featured on the Glam Network are social networks filled with user-generated advice, blogs, and photos, Fashionspace’s focus is on the actual fashion designers themselves — which in turn attracts agents, professional buyers, and of course — shoppers.

Bellm emphasized that the main global marketing push will come after a first round of funding to allow Fashionspace to build out its featureset, although she didn’t specify what Fashionspace is planning. To date, the company has seed financing from a private holding company in Guernsey, Channel Islands, UK, where Fashionspace is also located.

Instead of relying on advertising revenue, which hasn’t exactly been the savior for social networks both large and small, Fashionspace takes a 10% commission on the sale of each item. The cut seems to be quite steep, although the designers so far have willingly accepted the commission as a cost of promoting brand awareness. However Bellm says Fashionspace does plan to sell advertising as well to bolster revenue, when the site hits a critical mass of traction, with a goal of profitability within 3 years.

Fashion does seem to be quite universal: Fashionspace has attracted members in 120 countries, although its two largest userbases are the UK and US.

While Bellm wouldn’t elaborate, she mentioned that Fashionspace is working on a mobile platform for Fashionspace, which she says has “a lot of potential,” although she remains quiet as to what new features will make Fashionspace the leader not only in peer-peer fashion sales and social networking, but mobile fashion as well.

And while Bellm says there are no direct competitors, the site and concept is a bit reminiscent of uber-funded start-up Etsy, which brokers deals in hand-made goods.

The question is, can Fashionspace have the same success? 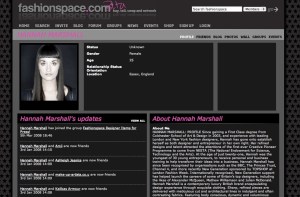