Trion World Network is today revealing how it is designing massively multiplayer online games with high graphics fidelity that will run across video game platforms — such as consoles, PC, mobile, and set-top boxes — a feat that no other video game company has yet pulled off.

The bold scheme will let the startup launch multiple games at once on what it calls the “Trion Platform,” which consists of software that runs on a bunch of game devices and exists on a network run by Hewlett-Packard. The games are cross platform because they run on servers in contrast to most desktop-based or console-based games.

“For decades, games have run on the clients, but we’re transforming them so they are completely server based,” said Lars Buttler, chief executive of Trion in Redwood City, Calif. “We think that will disrupt the industry.”

I’ll talk about the significance of shifting from client to server games below, but it’s a bit like how Salesforce.com disrupted traditional business software companies with its software-as-a-service, or how delivering software over the web has disrupted delivery through traditional means.

Trion may have amibitious goals, but it’s done some heavy lifting in just a couple of years: signing up partners and investors, building game design teams and creating a fundamental technology infrastructure. While most start-ups take on an innovation in just one part of the value chain, Trion is trying to create most of that value chain itself.

“It’s like Apple designing everything it needs,” he said. “It’s very risky, but highly profitable if it works. We’re not just doing a little piece. We’re bringing it all together.”

The first major partner being announced today is the Sci Fi Channel, but Trion plans to have a whole portfolio of online game worlds. I’m duly skeptical until I see how good these games look and how fast they play. Server-based games aren’t new as a concept. Typically, they have lousy graphics quality and suffer from time lags because of bandwidth limits, said Billy Pidgeon, a game analyst at International Data Corp.

Coordinating fast-action games is so tough that they usually have to be limited to 16 to 64 online players in a single game. Trion wants to allow thousands of players in the same game arenas. Others who try to build massive game worlds with thousands of players always run into some trade-off that compromises the quality of the experience.

Buttler can see the company he wants to disrupt outside of his company’s window, since Trion’s home is within view of Electronic Arts‘ headquarters. The more focused target, however, is Blizzard’s “World of Warcraft,” which has 10 million subscribers worldwide and is the No. 1 online game.

Because of its ambition and ability to cut big partnerships, Trion is probably the most interesting game startup I’ve come across in a long time. It has raised tens of millions of dollars (including a $30 million second round last year) and has a series of partners that indicate it isn’t just blowing smoke.

“This is around the corner, not years away,” Buttler said.

Trion investors include Time Warner, NBC-Universal (which owns the Sci Fi Channel), GE, Bertelsmann, Rustic Canyon, DCM and Trinity Ventures. It also has signed up an unidentified third-party game developer in Las Vegas to make games for the Trion Platform.

Gus Tai, a partner at Trinity, said, “The existing gaming market has yet to fully adopt the notion of Internet services that have real-time dynamics, personalization and persistence.” 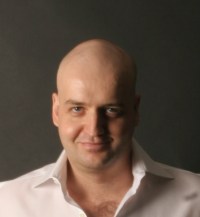 The server architecture allows the games to be hardware neutral, or able to run on any platform with minor changes, Buttler said. Someone could theoretically play a Trion game on an Xbox 360 against a PlayStation 3 gamer, if the console makers allowed it. But it’s not likely, say, that a mobile phone user would play against a console gamer. This idea alone is a big one. Consider, for instance, how popular Nintendo’s titles would be if you could play a Mario game on a variety of platforms.

On top of that, the advantage of designing a server game is that it can be infinitely malleable. The game developers can build just the initial part of a game, release it to gamers, and then continue to develop the content of the game. Each time a gamer logs into the server, the game can be different.

Not everything is server based, of course. Visual assets and sound files reside on the clients to some degree, but not in the same way that slows down today’s games.

The company can develop an episode at a time. If gamers don’t like it, the company can cancel the game without a lot of sunk costs. Buttler describes such game design as “dynamic.” Game characters or environments can be created or deleted on the fly, and the game company can hold “prime time events,” like staging an event inside a game just before a big plot point is revealed in the TV show. Those prime-time events can feature in-game ads. Thus, the development of a game and TV show can be far more intermingled than is possible today.

The first experiment will be with the Sci Fi Channel, which will create a TV show at the same time that Trion designs a multi-platform online game based on the same fictional universe. The companies didn’t reveal the name of the game/show. But Trion will be able to change the story and environment of the game to match the TV show’s episodes. That lets the games become more of a social magnet for gamers who are also fans of the show, allowing user participation in the same way that fans of the TV show “Lost” congregate on web forums with the TV show’s producers.

More companies are seeing the wisdom of cross-media investments, said Pidgeon at IDC. Big media companies such as Disney and Warner Bros. are trying to become bigger players in games. George Lucas is creating a Star Wars TV show at the same time his LucasArts game company is creating a Star Wars video game. Electronic Arts plans to take its “Spore” and “DeadSpace” games across multiple media, allowing the company to establish a bigger franchise and cash in on a single piece of content through several platforms. But the hurdles of crossing media or crossing platforms are huge. Trion is developing games in a way that reduces the risk of going cross platform and allows it to find a new source of financing through partners such as the TV and movie companies.

Trion has invested in building multiple game studios at once in San Diego, where it has recruited a number of former Sony EverQuest veterans, and in Redwood City, where it has Electronic Arts veterans on staff. It also has a major operation in Austin, Texas, where many online game companies reside. Buttler has been happily poaching the talent, including some lead game designers, in those regions. Trion has 110 employees, not counting a number of outside contractors.

“I think Trion is analogous to TiVo: probably one of the best ideas ever, but the jury is out as to whether they will enjoy the fruits of their labors,” said Michael Pachter, a well-known video game analyst at Wedbush Morgan. “Trion has the vision to recognize that games should be platform agnostic, and that applications and computing power are best provided from centralized servers rather than distributed throughout millions of locations.”

Pachter is not sure that Trion can fully exploit its plan and gain competitive advantages over other online game competitors.

“I like what they’re doing,” Pachter added. “Until I see someone doing it better, I’ll place a bet on their success.”

Meanwhile, Trion also said today that it is going to develop games for the Sony PlayStation 3 as one of its platforms. Finally, Trion announced that video game star Jon Van Caneghem, chief creative officer, will create a fantasy-themed massively multiplayer online role-playing game. Van Caneghem has been honored as a hall of famer in video games for creating the fantasy franchises “Might and Magic” and “Heroes.” Van Caneghem’s project is being built by the studio in Redwood City. Van Caneghem plans to create a game where the game could be different every time gamers log in to play. Further details aren’t available.

I’m stunned that Trion is trying to pull all of these pieces together. I can think of startups like 3DO that tried to do something this big, but Buttler is very wisely avoiding building a hardware platform. Buttler has co-development deals generating new capital, but so far he says he doesn’t need more money.

He’ll either leave a big crater, or a big mark on gaming industry history.