Intel isn’t going to be alone as it tries to skewer Samsung and other chip makers in portable Internet devices. Nvidia is out to claim that market as well.

Today, Santa Clara, Calif.-based Nvidia is announcing its Tegra brand of chips for beefy Internet handhelds that can do serious graphics. This brand will include two different kinds of chips. The previously announced Nvidia APX 2500 is aimed at smartphones.

We noted that Samsung is stepping up the chip battle in portable electronics, squaring off against Intel, Nvidia, and Texas Instruments. Now Nvidia is showing its cards. The Nvidia APX 2500 has the ability to connect via an HDMI cable to a big screen and play a full 720p high-definition video for 10 hours on the equivalent of an iPhone battery. The APX 2500 could also be used in navigation devices and portable media players. 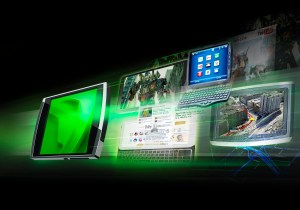 Other new chips being announced today under the Tegra brand are the Tegra 600 for phones and Tegra 650 chips for mobile Internet devices (MIDs). These are wireless broadband-enabled portable devices with screens ranging from four inches to 12 inches. All of the products are descended from Nvidia’s $357 million PortalPlayer acquisition in 2006.

A half-dozen or so devices are expected to debut with the Tegra chips by the end of the year. The company is making the announcement at the Computex trade show in Taiwan. Besides Intel, Nvidia will likely have to square off against Samsung, which we wrote about a few days ago, and Texas Instruments.