With 88 M&A transactions in the advertising infrastructure market last year, totalling over $12 billion, online advertising has clearly created a lot of value over the past decade. So much value in fact that market leader Google is now the most valuable brand in the world and was at one point the fifth most valuable company in the United States.

But so far much of the focus has been on direct response advertising, where direct marketers have leveraged the internet’s ability to track consumer behavior and infer purchase intent to deliver relevant one-to-one marketing — through paid ads next to search results, for example. But what about brand advertising? Social networks and blogs have begun unlocking the interactive potential of the Internet, but taking full advantage of this interactivity and online communication remains a huge untapped opportunity for advertisers.

Although social networks have traditionally struggled to effectively monetize their inventory, the emergence of scalable, engaging brand advertising driven by consumer data could go a long way towards helping such large web companies make the most of their online audience. The advertising world is starting to realize this. 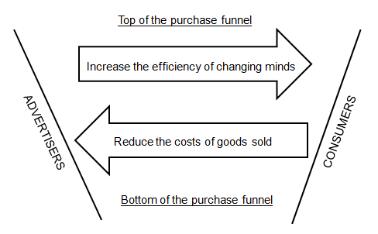 At the Ad:Tech online advertising conference last month, and the IAB Annual Meeting earlier this year, much of the discussion centered around three key trends that are helping to shape the future of online advertising: 1) Companies are beginning to realize that advertising is both a science (relevance) and an art (engagement) 2) Data is becoming more important than ever, and 3) The market will see an increasing level of co-opetition between advertisers, agencies, ad networks and publishers.

Today many people assume that advertising is a math problem to be solved, and that if they use the right combination of data, algorithms and targeting, it’s possible to create the most value possible by serving the right ad to the right person regardless of where they happen to be on the Web. However, that approach only takes into account advertising that’s focused on the bottom of the purchase funnel, the purpose of which is simply to reduce the cost of goods sold. Most direct response advertising falls into this category. The truth is that most large advertisers spend their money at the top of the purchase funnel, where the goal is really, to quote a phrase from GroupM Interaction CEO Rob Norman, to increase the efficiency of changing minds. So far there has been very little innovation on the branding side of the online advertising equation, however there are some startups, such as SpotRunner, NextMedium, and 33Across (a First Round portfolio company) that are beginning to tackle this problem.

In addition to giving small companies the ability to advertise on local TV, SpotRunner has broken down the brand advertising creation process into high quality, modular units that advertisers can use to create compelling video ads for orders of magnitude less cost than a typical TV commercial. Using SpotRunner, advertisers can blend TV’s high brand engagement with the Internet’s interactive, tracking and targeting capabilities.

Another compelling brand advertising solution with a lot of potential is product placement. Given the on-demand nature of content consumption and the increasing atomization of content, product placement lets  advertisers engage with their audience while taking advantage of the internet’s interactivity. NextMedium has built a product-placement marketplace that gives entertainment companies and advertisers the ability to define, measure and manage what was once a highly labor-intensive process that depended mostly on who you knew.

First Round portfolio company 33Across is taking yet another approach to brand advertising. They leverage social media data to help brand advertisers identify high-value influencers that can be much more effective than traditional advertising at communicating brand messages to those around them.

Although data in general has always been an important part of online advertising, it is likely to play an even more crucial role going forward. In particular the areas of data ownership, access, and control will become integral parts of the online advertising landscape. So far the FTC has proposed self-regulation rather than legislation regarding the transparency and consumer control of online data. Advertisers are increasingly looking to have more ownership over the data that their campaigns generate, while publishers want to extract as much value as possible from their own consumer data. At some point consumers may even look to control and manage access to their intent data themselves. An opt-in database of user intentions that promises to deliver only relevant content across several mediums would be immensely valuable.

Advertisers and publishers are already beginning to realize the value of the data that they generate. In March, for example, sports broadcaster ESPN announced that it had cut ties with ad networks, stating that ad selling that relies on arbitrage and algorithms is not for them. Although this was partially due to concerns over whether ad networks devalue the publisher’s brand equity, it was also because publishers like ESPN began to see networks as profiting on their user data, and as a result potentially threatening their own marketer relationships. By selling directly to advertisers on its own, ESPN can capture and re-use all of the consumer data generated by the advertising on its site, data that had previously been used by the ad networks to build their business.

The future of online advertising is likely to see even more co-opetition between advertisers, agencies, ad networks, and publishers. The lines between each of these businesses is becoming increasingly blurred, as each attempts to capture more value from the advertising value chain. Advertisers such as Johnson & Johnson are becoming publishers, launching content sites such as BabyCenter.com in order to create inventory they can advertise against, and more importantly, to get access to data about their target customer. Agencies such as Group M are also becoming publishers, creating and distributing their own content in order to own some of the data and share in the value created from taking risk. Terry Semel is currently considering a bid for talent agency IMG, hoping to transform it into a media and content company. Publishers, such as Meredith are becoming agencies, becoming the agency of record for a number of large advertisers after acquiring three agencies over the past few years. Finally publishers such as Yahoo are becoming ad networks, launching initiatives to broker ads between advertisers and third party publishers.

Although current economic conditions may affect the market somewhat, the discrepancy between the percentage of advertising dollars spent online and the percentage of consumer time spent online means we’re likely to see continued growth in online advertising spending in the long term. As a result I expect to see much more innovation and value creation based on these three key trends
going forward.

Araabi joined First Round Capital in 2007. Prior to First Round, Araabi was part of the founding team at MySpace.com, where he led the site’s early online marketing and customer acquisition efforts. Previously, Araabi and the other MySpace founders had started ResponseBase, an online ad network that was acquired by Intermix Media in 2002. He began his career as one of the earliest employees at Xdrive.com, an online storage company that was acquired by AOL. His areas of interest include online advertising, consumer internet services, SaaS/open source software, and mobile. His blog can be found at mazenaraabi.typepad.com.