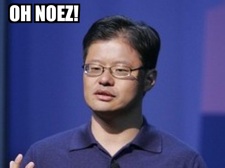 Billionaire investor Carl Icahn is back making waves for Yahoo again today. He’s now saying that if he is successful in his hostile takeover bid of Yahoo, he will remove its chief executive Jerry Yang, according to The Wall Street Journal.

Icahn believes Yang and Yahoo’s current board dropped the ball with regards to Microsoft’s proposed buyout of the company, which fizzled last month. Icahn also believes Yang and the board never had any intention of accepting a Microsoft offer, and worse, may have taken steps to deter such a deal. He believes this despite public assurances by Yahoo that it was open to listening to all offers and was actively talking with Microsoft.

A couple of reports that have recently come to light do not look too good for Yahoo.

First of all, it appears that the company rejected a $40-a-share offer from Microsoft back in January of 2007. Microsoft, of course, came back a year later with its public $31-a-share offer because Yahoo’s stock fell dramatically over that span.

Another report today suggests that Yahoo actually opposed a search advertising deal with Google prior to Microsoft’s bid, according to eWeek. In fact, the report says that Yahoo rejected the notion just one day before the Microsoft bid.

This is very interesting because the Yahoo/Google agreement was widely seen as a main factor for how Yahoo could possibly get away without selling to Microsoft. It seems odd that Yahoo would be so gung-ho about the deal under the cloud of the Microsoft takeover, but against it just prior to it. The term, “marriage of convenience” comes to mind.

Yahoo board is convening today at its Sunnyvale headquarters. That should be an interesting meeting…