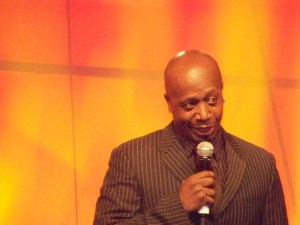 It was Hammer Time tonight at the Intel Capital dinner.

With some 600 start-up chief executives in the audience, entertainer MC Hammer offered ministerial advice (embrace technology, don’t forget community) for tech entrepreneurs from a “content guy’s” perspective. With references to “tweets” and rubbing shoulders with the tech elite at the D6 conference, the middle-aged rap artist showed he knew his technology.

He started by showcasing musicians from his own music label (including his talented daughter) and moved on to a demo of his latest start-up, DanceJam.com, where he is chief strategy officer. He closed with a rendition of his ’90s hit, “Too Legit to Quit;” joining him onstage were a couple of dozen audience members as backup dancers — including Intel CEO Paul Otellini. (We have the pictures to prove it).

Hammer (Stanley Kirk Burrell) started on the road to fame as a bat boy for the Oakland A’s baseball team. Slugger Reggie Jackson gave him the nickname “Hammer” because he thought the youngster resembled “Hammerin’ Hank Aaron.” Hammer said he was an entrepreneur from the start, selling tickets that the A’s players were allotted but didn’t use. Charley Finley, the legendary coach of the A’s, kept Hammer aboard as a child “executive vice president.” By the time Hammer was 14, Finley was asking Hammer to fire people.  He had the crowd laughing at that. 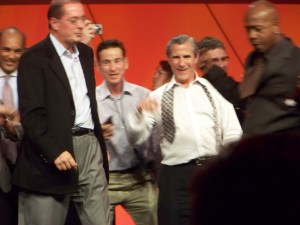 But he got serious for a moment, noting how Finley as a CEO managed to pull together the fractured community of Oakland — during a time of urban chaos and protests of the Vietnam War — with five championship wins.

“I would be less than I really am, if I stood before four or five hundred CEOs, and didn’t emphasize the point that each and every one of you, in our current, turbulent times, each one of you can change the environment,” he said. “We as CEOs are not irreplaceable. Why don’t we take our time to create not only great businesses, but make an impact on the lives of the people in our companies and bring some light into dark moments?”

He noted how Napster disrupted his own industry and mentioned how he met a despairing Shawn Fanning as Napster was going down the tubes. While riding around in Hammer’s Hummer, Hammer told the bright Napster founder that he probably had four or five companies in him. Fanning just sold another company, ThreeSF, to Electronic Arts for $30 million. (EA confirmed that today, but didn’t disclose the price).

“Don’t let them discourage you,” Hammer told him. “Hang in there. Even when I saw disruption coming, I embraced the man and the technology. Today, the music industry still doesn’t embrace technology. Just to use a song, you still need a seven-month licensing process.” 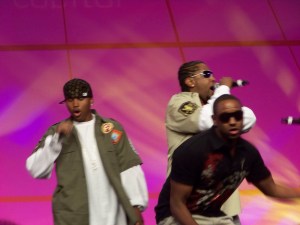 Hammer was looking a bit older than I remembered him while watching his smash “U Can’t Touch This” video in my youth. But his deep preacher’s voice was unmistakable. He left most of the dancing and singing to his own daughter and other rapping kids being groomed for the big time.

He noted how he considered every “artist as a start-up” at his Full Blast House music incubator, where he sees his job as applying filters to find talent. Those young artists are immediately matched with business development people who could start thinking about the brand at the beginning and move beyond CD sales.

“There are so many ways to monetize content,” he said.

One of those is to showcase the dancers and artists on his new site, DanceJam.com, founded a few months ago and funded by Softbank and Rustic Canyon Ventures. His site demo didn’t work. “Oh well, Hammer, welcome to the tech world,” he said, not skipping a beat. 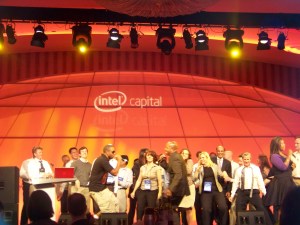 But its point is to highlight young dancing talents, index their videos, allow viewers to rate them, and show dance competitions “dubbed battles.” Maybe it will catch on. Hammer reminded everyone that music is what made MySpace take off. He promised big partner announcements soon. At the same time, Hammer is starting an effort to get music and technology into the hands of troubled youth in Philadelphia to “keep them from killing each other.”

He closed with an encore performance, encouraged by Intel Capital President Arvind Sodhani, who did his own Hammer dance imitation. Hammer was inspiring and he brought the crowd to its feet. Don’t be surprised if a few of those 600 CEOs start busting some moves in the future.