If you’re ever annoyed by the at-times howlingly inappropriate ads on Facebook, there’s now an easy way to express your disapproval — users can vote for or against the small “social” ads that appear on their sidebar.

This addition should benefit users and advertisers. Despite being based on information in a user’s profile, those sidebar ads are pretty hit-or-miss. The new feature means I can tell Facebook that I’d like to see fewer annoying relationship network ads featuring images of bikini-clad women, and more cool, creepy ads for Twin Peaks. It also gives companies another way to measure whether their ads are well-received and effective, which is particularly important at a time when everyone’s still trying to figure out the social advertising business model. 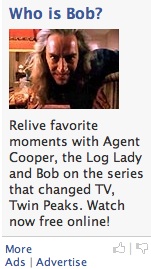 The feedback system could also encourage users to pay more attention to Facebook’s advertising. After all, my current habits involve ignoring those ads as much as possible. But as I gleefully gave thumbs-ups and thumbs-downs to a whole series of ads, I kept thinking, “Wow, I’ve never noticed that one before.”

Facebook hasn’t made any official announcements about the feature, and right now all I see is a simple up-or-down voting interface. Rob Webb, who was probably the first blogger to write about this, has screenshots of a more detailed feedback system that asks why users liked or disliked a certain ad. I’ve emailed Facebook for clarification, but haven’t heard back yet.

Facebook regularly experiments with site changes in an effort to continually improve the user experience. The feedback tool for Facebook Ads that you noticed is currently available to a portion of site users. We are evaluating the response to the tool and considering whether to make it more broadly available.