Aquaculture may not rank high on most investors’ priority lists, but with global food prices continuing their inexorable rise and billions now pouring into farming, one startup is making the bet that this growing sector may finally be ready for prime-time.

Honolulu-based Hawaii Oceanic Technology has developed what it calls a “revolution in open ocean aquaculture technology”: A 200-foot-wide spherical enclosure — dubbed the “Aquasphere” — that can be used to farm fish in deep waters, offshore.

The open ocean is being underutilized, CEO Bill Spencer explained to me. Unlike terrestrial systems, which only offer a 2D framework in which to operate, the ocean is a fully 3D environment. This, he says, means that an equivalent amount of seafood can be produced with a much smaller footprint.

The Aquasphere is different from conventional fish farming, which has earned a bad reputation because of its negative environmental impact. Conventional fish farming producers a huge amount of effluent that often chokes entire bays and estuaries, killing off all marine life and leading to the formation of low oxygen “dead zones.” HOT’s Aquaspheres avoid that problem by relying on deep ocean currents to provide a continuous, oxygenated flow of water. 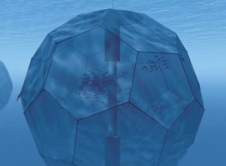 The spheres are suspended in place thanks to HOT’s hybrid ocean thermal energy conversion (OTEC) system. This system derives energy from pulling colder water from below up into a heat exchanger, which converts the temperature difference into useable energy. That powers the engines, telemetry and robotics that maintain the spheres’ geostatic position and provide constant remote monitoring. The OTEC system is also used to bring the spheres up to the surface, which allows for the easy harvesting of fish. This energy conversion system is one of 21 technologies the company submitted in a recent patent application.

While the spheres are suitable for farming a variety of fish, HOT will focus on ahi tuna — a high-quality type of tuna that makes its living off Hawaii’s coasts. Spencer estimates that each sphere could produce 20,000 hundred-pound ahi tuna, or 1,000 tons. With high quality tuna commanding upwards of $10 a pound in many parts of Asia, one sphere alone could yield $20 million in gross revenues, at a high margin. Because of their proximity to the coast, the Aquaspheres would provide a quick, on-demand source of premium tuna for customers around the world; Spencer says 48 hours’ notice would be enough for his company to get the fish “from the sphere and to your dinner table,” as he put it to me. With land resources increasingly stretched to capacity, Spencer believes his 82,500 cubic-meter Aquaspheres could become particularly attractive for crowded countries like China.

To minimize its costs, HOT will feed its tuna a blend of fishmeal and algal remnants left over from biofuel production, which provide a rich source of pure protein. Since Hawaii is currently one of the world leaders in algal biofuel research, Spencer believes he’ll be able to secure a ready supply of left-overs inexpensively. HOT is trademarking its own ahi brand, King Ahi, which will enable it to achieve even higher margins.

HOT’s intent is to build a completely closed-loop system: One in which all aspects of breeding, rearing and capturing the tuna are controlled by the company and in which no harm is done to the ambient sea life. The spheres themselves are easy to build and made up entirely of off-the-shelf parts like kevlar and aluminum frames.

Though he was mum on the details, Spencer said his firm completed its first round of funding last year, which was led by lead investor Kolohala Ventures and San Francisco-based Fulcrum Funds. He’s currently looking for another $10 – 12 million in second round funding to get three Aquaspheres in the water by the end of 2009.

CleanFish, another aquaculture startup based in Sausalito, Calif., hopes to tap into the $65 billion industry by adopting a different tack: Connecting customers with sustainable fishermen by acting as a distributor and providing an environmentally responsible brand under which fisheries can operate.