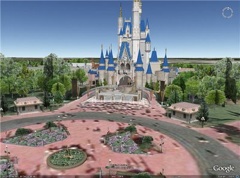 I can see it all too clearly. Next February, during the post Super Bowl XLIII celebrations, a reporter asks the MVP of the game what he’s going to do now: “I’m going to Disney World — on Google Earth!”

It’ll be the perfect blend of nostalgia and marketing.

Yes, kids (and kids at heart), Google has today added detailed 3D imagery to make it possible to view Disney World, and more specifically, the Magic Kingdom, Epcot Center, Hollywood Studios and the Animal Kingdom, right from within the Google Earth application.

It was actually Disney itself that created the 3D models and KML layers. Because of this, there are some features you won’t find in the rest of Google Earth, such as the ability to wave magic wands and sprinkle pixie dust (if that sort of thing appeals to you).

On top of the almost 5,000 structures Disney modeled in 3D, it threw in thousands of real world objects such as trees, benches and signs just for good measure.

I went to Disney World many times when I was a kid. Now I can go back without traveling the nearly 3,000 miles. I’m sorry, but I have to say it: “When you wish upon a star…”