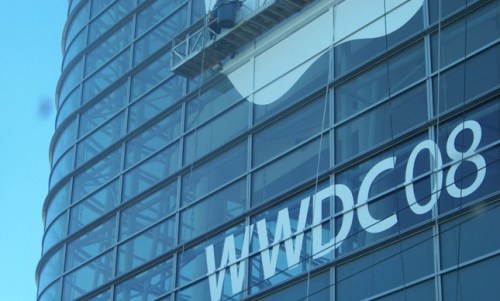 Aside from the ever-present possibility of a real curveball, the clues as to what we’ll see Apple announce at this year’s Worldwide Developers Conference (WWDC) are likely out there right now.

Not surprisingly most of the ones we’ve seen revolve around the 3G iPhone, which Apple is expected to unveil at the event.

Here’s what has been going around the past couple of days:

There are some mysterious boxes at a Fremont, Calif. distribution center owned by Apple partner Quanta, where Forbes’ Brian Caulfield has been snooping around. While some boxes at the facility are clearly marked as containing products such as iMacs, others are simply brown, plain boxes — and there are lots of them.

A report indicates that resellers in Australia are getting boxes from Apple stating “Do not open until Tuesday, June 10th 2008” — the day after the WWDC.

Like Brad Pitt in the movie Seven, I think we all want to know “what’s in the box?” 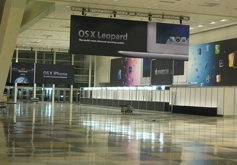 Some banners for WWDC are already up at the Moscone Center in San Francisco, Calif., where the event will be held. Our own Dean Takahashi (who will be at the event alongside myself) took the picture at the top of the post.

It’s clear from the banners that OS X is going to be a focal point of the conference. One of the banners indicates that Apple is now calling the iPhone operating system “OS X iPhone”, whereas it’s calling OS X 10.5, simply “OS X Leopard” now. This seems to indicate a slight rebranding and streamlining of the naming process.

There is no banner for “OS X Snow Leopard“, the rumored name of Apple’s next operating system — yet. Find more pictures here.

Telecom Italia, which will distribute the iPhone in Italy (alongside others), is promising customers that they will know more about the company’s iPhone plans on Tuesday morning at the latest — again, the day after the WWDC keynote.

Meanwhile, when employees at the Quanta facility in Fremont were asked by Caulfield in his follow-up report if they had seen the new iPhone, at least one employee gave him an affirmative response and went on to say that it was “cool.” Another employee simply repeated “Mhmm,” before running off.

We’ve also heard reports from some store employees about stores being shut down over the past week for special sessions. This seems to be in line with the news of iPhone 2 training.

Meanwhile, Microsoft is also boasting — about how great Windows Mobile is. And many reporters find their timing quite pathetic.