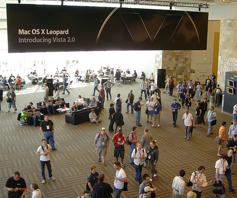 A few days ago I wrote a post wondering if Twitter could stay up during Steve Jobs’ keynote address at tomorrow’s Worldwide Developer’s Conference (WWDC) event. When I asked the company for a comment, Twitter’s Biz Stone responded that they had a plan in place to stay up during the event and even had something fun planned. Today, he’s elaborating a bit more in a post on the Twitter Blog.

Twitter is using things such a memcached, a memory caching system that improves performance, as well as more read-slave servers to take some of the strain off of its database. This should greatly help as the service expects ten times the amount of normal traffic during the event tomorrow. I’ve noticed the service running significantly more smoothly over the past several hours, so hopefully that is a sign of things to come.

Twitter also has a backup plan. Dubbed “Operation: Gray Mode,” if Twitter still can’t handle the traffic surge from WWDC, it will simply start turning off features. Twitter has used this approach several times over the past few weeks (disabling things such as pagination and replies). Don’t be surprised on Monday morning if you find a very bare-bones Twitter.

And no Apple event would be complete without a “One more thing,” so Twitter is giving that to us as well. Though it’s not ready yet, apparently the service will have some sort of dedicated Apple announcement tracking system in place for tomorrow.