Electronic Arts game designer Will Wright may come up with the billion-dollar game ideas that get him on the cover of Wired magazine. But Lucy Bradshaw is the one that turns those ideas into bestsellers. The vice president in charge of production at Electronic Arts’ Maxis studio in Emeryville, Calif., Bradshaw runs the team for Wright’s latest brainstorm, “Spore.” It is one of the most anticipated games of all time, and Bradshaw heads the 80-person team cranking the video game out for its Sept. 7 launch. The game is a year late, but Bradshaw says the team has now had the time to polish the game play and execute on all of the grand ideas for sharing content via YouTube, email and other means. No stranger to the big time, Bradshaw spearheaded the production of “The Sims 2,” produced “SimCity 4,” and played a big role in the development of “The Sims,” which along with its offspring has sold more than 100 million units. Bradshaw joined EA in 1997 after stints at Activision and LucasArts. Now she and Wright are teamed up again on EA’s biggest game. 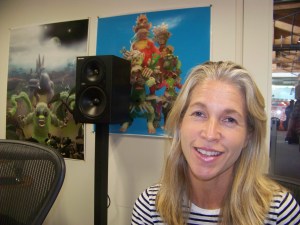 VB: I remember talking to you about the launch of The Sims in 2000. How does the pending launch of Spore compare to that?

LB: It’s funny. When we were launching The Sims, it wasn’t on the radar. People within EA were still scratching their heads. It was a game about human beings. It didn’t have leveling up or create an adrenaline rush. It took a lot of people by surprise. There were some very strong proponents within EA. [Then-EA executives] Bing Gordon, Don Mattrick and John Riccitiello [now CEO] strongly supported it. We didn’t have much press around it. With Spore, we have been talking to the press about it for a long time. Will has the success of The Sims and SimCity behind him. It’s an exciting and huge project with so much more attention. We’ve been working extremely hard to make sure we fulfill his vision on it.

VB: How far along was Spore when you joined it?

LB: I finished up The Sims 2. Will was finishing The Sims Online. Then I came onto Spore when it was ten people. Will was building prototypes, shaping the scope of the project. Most of the work had been done on what the creators would do and whether we could do the procedural animations, [which are animations that are not scripted and are really driven by interaction of the characters with the environment.] To be honest, [programmer] Chris Hecker was just beginning to think about how to do the procedural animations. We didn’t know if we could get the underlying technology done.

VB: Did Will have any trouble selling you on the idea?

LB: I thought it was an amazing idea. I thought it was important to put top people like Ocean Quigley, Andrew Willmott, Chris Hecker and others [on the project] so that we could make a believer out of Will himself. He was never quite sure he could pull this off. When I started on the project, I thought we would have much simpler games around each one of the stages. To realize the depth of creativity, we had to go deeper. We got in there and realized we had to go deeper than we originally thought. 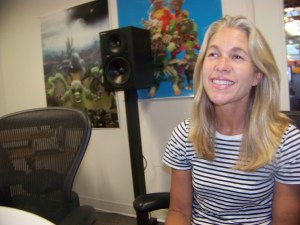 VB: Did you wonder if the great idea of moving from a cell level to a galaxy level could be translated into a great game?

LB: There were a lot of prototypes that got developed. You could foresee the game mechanics early on that could be fun. We had to make sure we had the technology to do those mechanics. Then, some of the difficulties have been about how we get the pacing right in this open world so that the game mechanics can really sing. Some of the challenges have been in the details, not the whole.

VB: How would you do things like missions? In Grand Theft Auto IV, they have an open world where you can do anything, too. But they can at least assign gamers tasks to do.

LB: It’s about building up an artificial intelligence so that you feel like you are living in the moment. In the space game, you can accept missions from other aliens that have consequences down the road. When you do, you realize the repercussions of some of those actions. You may be taking on an ally and making an enemy of another one. The repercussions are on an epic scale.

VB: How do the cell, planetary, and galaxy levels of the game differ?

LB: They are different games. In the cell phase, you do things like eat and grow and survive. In the space stage, you look at your colonies and whether your empire is expanding. It becomes a larger area to experiment in. The player gets a lot of choice. You can find relics and artifacts. You can explore planets. Like with The Sims, a lot of people never played through the entire career campaign. Spore can cut at both levels. You can beat the campaign or you can just explore and create. 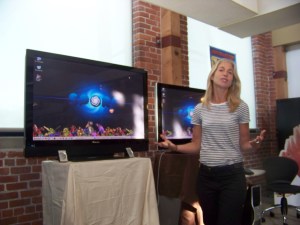 VB: How long have you worked on it and what stretched out the schedule?

LB: Will has been on it five years and I have been on it for three. It was the scope. We wanted to make sure players could take advantage of the player creations. It was bigger than we thought it would be. We realized a hidden feature, too. It was always part of the concept. But it was under the hood. We saw that with sharing, social networks on the Internet — that meant we had a much bigger opportunity. We just realized that we could make it into something grander with the networking.

VB: Do you call it a massively single-player game still?

LB: Will likes to call it that. You have a galaxy that is entirely your own. You have complete control over it. Yet it’s so permeable. You can bring all those creatures created by others into your world. I love statistics. I love seeing graphs. We can track player content and see how many galaxies their creatures were used in. It’s a combination of a solo game and a social game.

VB: You and Will have said that you thought of this as a franchise from the very beginning. That makes it a bigger bet across all media categories, right?

LB: We made something out of The Sims that was big. We had object-oriented code. But there was no plan for an expansion pack or sequel. We did take advantage of that object-oriented code and started making objects we could put out on the web site. That led to the expansion packs, which sold to 7 percent to 10 percent of the audience. It really built up. People saw how we could create something that expanded the universe of The Sims. We thought of Spore as a franchise from the start. We have made it into something that takes advantage of the tools we’ve created. This is the first incarnation of a long, epic journey. I can’t wait to take advantage of some of the smaller components.

VB: How early did you decide to break off a Spore Creature Creator and then ship it early? 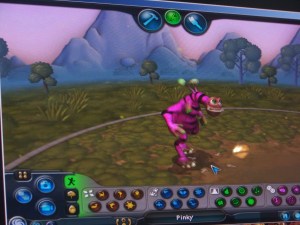 VB: How many people contributed?

LB: We have a team that is 80 people for the PC game, Mac version, and community site. The DS game was done by a different group. The mobile team did the cell phone game and they are taking it to the iPhone. With The Sims, we had 140 people.

VB: Does that translate into a great deal of pressure?

LB: Having a game that people anticipate and have heard so much about adds pressure. People are going to be amazed. There is magic in this game. Where will they go with the Creature Creator? I always sit on needles and pins at this stage. I was never sure how The Sims 2 would be received. I had been staring at it from two inches away for so long, I didn’t have perspective.

VB: Is Spore expanding the definition of a game?

LB: It is. Spore has a game structure. It also has all of these nooks and crannies in it. These things don’t take advantage of the game play. There were players of The Sims that only built houses and didn’t play the rest of the game. SimCity was like that for me. Spore takes a different approach to gaming and lives entirely in the world of gaming at the same time.

VB: It’s successful if it gets a lot of grandmas into gaming?

LB: It is successful if it sells. It’s successful if we get to the broad audience, not just one niche. And if we see people sharing it outside the boundaries of what the game is, I would consider it a big success. 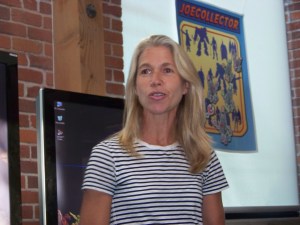 VB: Your team probably had debates about whether to charge for the content in the Spore Creature Creator or give it away entirely for free to create buzz?

LB: There have been debates on that. We also debated whether to do the version we charge for. The web site is also a part of the game. It’s not a stand-alone product but a feature. We’ll expand it after the launch as well. That’s been a hallmark of our games. Players can add to what we do.

VB: It seems like Spore is very well equipped to survive in the social networking and entertainment craze. People have a lot of other choices now, beyond just games, on sites such as Facebook. If Spore were just a game, it might not be able to compete.

LB: People are choosing different kinds of gaming platforms beyond the traditional versions. It’s an exciting time because there are new definitions of games, not just boxed products at retail. Spore is poised to fit into that really nicely.

VB: It is spilling across the borders of gaming?

LB: Yes. I find that exciting. It is going outside the bounds of what we have done before. We’ve had fun with web sites that allow people to make it their own. The Sporepedia cards will let people share their creations with everyone.

VB: Are you glad you got the extra year from EA CEO John Riccitiello?

LB: It was a good extra year. We were closing on a game we could ship. It was thinner. It didn’t have as much around the sharing. When he played it first, it wasn’t quite there yet. We weren’t surfacing the things that made it more social. We had great editors that helped us see what we could pull together.

LB: (Laughs). We’re in the bug-fixing stage now. For the next game, I think I want to try something smaller.