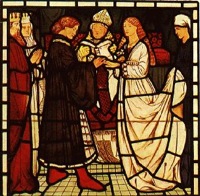 Google and Yahoo have announced that after checking each other out for the past few months, they’re ready to tie the knot on their search advertising deal.

Under the agreement, Google will supply ads for Yahoo’s search pages. There’s an initial four-year term for the deal, which can be extended for two three-year terms if Yahoo wants. The two companies will also allow users to communicate between their respective instant messaging services.

The news isn’t too surprising — Yahoo’s statement earlier today that its talks with Microsoft are completely over seemed like a prelude to this announcement, and other news sources have reported that a deal was either pending or complete; TechCrunch even said the announcement would come at 1:30 Pacific today (well, they were close …).

This partnership is probably the best option for Yahoo right now, as it faces diminishing search market share and investor Carl Icahn’s attempt at a hostile takeover. Microsoft, predictably, criticized the deal when it was in the trial stage, noting that it gives Google more than 90 percent of the search advertising market. Plenty of commentators have been eager to point out the rather rich irony of Microsoft bringing up antitrust concerns — but that doesn’t change the fact that the company has a point, and that the partnership will likely face serious antitrust scrutiny from the federal government.

In fact, Google and Yahoo are clearly aware of this and have come out to beat the government to the punch. Although they did not have to receive regulatory approval for the deal before going forward with it, both sides are agreeing to delay implementation for three and a half months so it can be reviewed. Well played.

It’s worth noting that fellow VentureBeat writer MG Siegler previously called the Google-Yahoo partnership a “charade.” I’m surprised that a movie buff like MG forgot that despite its title, Charade (the Stanley Donen film) actually ends in a marriage proposal.