The two 53.4 megawatt plants combine the use of conventional solar thermal technology with biofuels derived from agricultural waste, livestock manure and grass clippings produced in surrounding Fresno County to allow for 24/7 electricity generation. Although the plants are smaller than other solar thermal deals cinched by PG&E, they mark the first time it has tried combining solar with other generation schemes, and help cement the utility’s role as a leader in renewables. 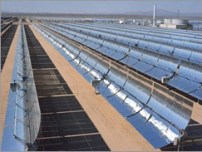 The plants, which will begin operations in 2011, will be located near Coalinga, in the center of the state, and provide enough energy to supply nearly 75,000 homes. Martifer’s solar thermal technology works by harnessing the heat produced by concentrating sunlight on liquid-filled tubes with curved mirrors, called solar troughs, to run steam turbines which, in turn, generate electricity. Its major downside, of course, is that it can only operate when the sun is shining.

This is where Martifer’s innovative hybrid technology comes in handy: By switching over to biofuels at nighttime or on overcast days, the company will be able to keep its plants running continuously. The 250,000 pounds of biomass each plant will require to operate on a yearly basis will also produce heat that will be used to run the turbines. Getting that amount of biomass shouldn’t be hard: Andrew Byrnes, one of the project’s developers at San Diego-based Spinnaker Energy, told Fortune that Fresno County alone produces close to 2 million tons annually.

The company said the electricity generated from this hybrid technology would be competitive with energy generated from natural gas and coal plants. In recent months, PG&E has also inked contracts with BrightSource Energy, which will provide it with 900 megawatts of solar thermal energy, and Calpine, which will supply geothermal energy from The Geysers field north Calistoga.

Southern California Edison, another large utility, recently said it would invest $875 million in a 250 megawatt project to blanket unused commercial rooftops in three L.A. counties with solar panels. The project, which will power 162,000 homes, will take around 5 years to complete.

Earth2Tech reported that CEO Peter Darbee has expressed interest in using PG&E’s considerable assets, around $36 billion, to purchase solar thermal plants outright in the future. For now, however, its ability to do so is constrained by the lack of an investment tax credit (ITC), a 30 percent tax credit for solar investments that doesn’t extend to the utility industry.

According to the San Jose Mercury News, the utility has signed contracts for 2,500 megawatts of renewable energy since 2002 in an effort to meet California’s tough energy mandate — 20 percent derived from renewable sources by 2010. PG&E put out a request for offers (RFO) in April to ask for an additional 800 – 1,200 megawatts in renewable energy contracts by 2015. The company will announce the winning bids next month. Earth2Tech also reported that CEO Peter Darbee has expressed interest in using PG&E’s considerable assets, around $36 billion, to purchase solar thermal plants outright.