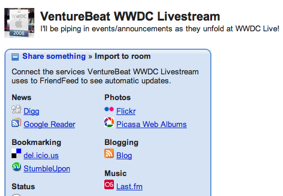 Last week we used the social aggregation and conversation service FriendFeed to handle our live coverage of Apple’s WWDC event. The result was sublime.

Utilizing the sites’ new “Rooms” feature, we built a room with several hundred subscribers all interested in learning and talking about what was happening at the WWDC keynote as it unfolded. Between the constant “thank yous” and indications that we were getting the news out there faster than anyone else, it was clear that FriendFeed would be an excellent tool for anyone willing to use it for event coverage.

That said, I noted some improvements that could be made. Namely an easier way to get elements such as pictures into the rooms’ feeds. Tonight, FriendFeed took a big step towards those improvements by allowing for the importing of items directly into rooms.

For anyone not well-versed in FriendFeed this may seem like a minor change — if it seems like one at all. But look at it this way, in the WWDC FriendFeed room for us to post pictures to the rooms’ stream we would have had to manually post them via a link in the room. Normally this might not be a huge deal, except that I was typing about a mile a minute and any time I took to do any other task would have degraded our coverage.

With this new import functionality, I could have simply setup a Flickr account which I was uploading pictures to and those pictures would then be automatically have been brought into the room as thumbnails. I could have also set up the room to pull in all Twitter messages from someone tweeting the event, or all Digg items if someone was scanning Digg, looking for items about WWDC. The same is true for any of the 41 services FriendFeed currently allows you to import.

Not to mention the fact that I could have pulled in any site’s feed to the room. This could be particularly useful if you were trying to create a room geared around a particular subject, but wanted more than one source of content for it. A room for green tech is an example Sarah Perez created.

It simply could have made our coverage much more robust. Next year, it will.