HP’s thin, flat transistors, which are made of cheap, plentiful zinc and tin, will create a tracking system that directly focuses sunlight on XE’s proprietary solar concentrators. These will allow XE’s concentrators to achieve double the conversion efficiency of conventional silicon solar panels. XE’s solar trackers could also be adapted for concentrated solar thermal applications, opening the door to other potentially lucrative deals.

The transparent electronics, in addition to preventing light from being blocked as with conventional systems, allows for a greater degree of aesthetic appeal by enabling the placement of artistic patterns on the arrays — which means they could eventually be incorporated into a variety of building materials and in facades.

Furthermore, the use of HP’s transistors avoids the need for mechanical tracking devices, which incur high maintenance costs and are one of the biggest obstacles to installing CPV systems — often casting shadows onto themselves. XE CEO Colin Williams told CNET that its final design would call for a multilayered solar panel with HP’s transparent transistor technology, a high-efficiency solar cell and a plastic internal reflection concentrator. In an industry where space and efficiency come at a premium, XE could grab a large slice of the rooftop solar market with its flat, compact systems. The ease of use and adaptability its transparent electronics offer means XE could break into other, more specialized markets — especially given their aesthetic value.

Though the company has yet to develop an actual prototype, it expects to have its first-generation array model for utilities available next year. Williams said his firm’s array would be able to convert up to 43 percent of sunlight into energy at a cost of $1.50 per watt once it reaches a 100 megawatt production capacity.

It is currently in the process of raising a $5 million first round of funding and plans on raising another $35 million round within the coming months. It will use these funds to continue its product development and to build national and international manufacturing, marketing and sales operations.

The field of high-profile CPV startups has grown by leaps and bounds over the past year. Silicon Valley Solar, which develops internal concentrator modules, Cool Earth Solar, which received funding a few months ago to develop plastic balloon concentrators, and Sunrgi, which has claimed 5 – 7 cents per kilowatt prices from its solar concentrator design, are just a few of the companies we’ve covered.

According to the San Francisco Business Times, HP is considering 150 licensing deals with applications in solar and energy efficiency. Other tech firms that have parlayed their expertise into energy efficiency technologies include IBM and Intel. IBM unveiled a new line of small, modular data centers and green financing software as part of its Project Big Green initiative this week while Intel, which showcased 70 research projects at its recent Research@Intel event, is developing energy efficient platforms and environmental sensing systems, among others 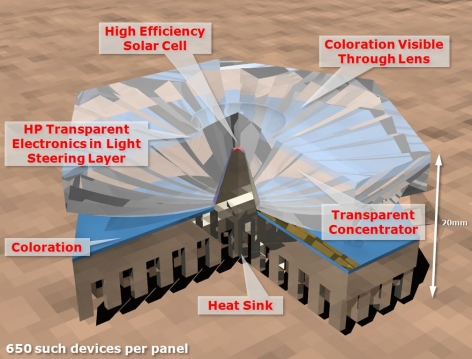