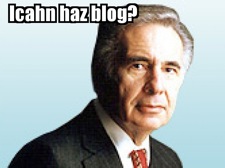 Yes, the rumors are true. Carl Icahn has launched a blog. If this week is any indication, he plans to use it heavily to bloviate on topics near and dear to his heart — namely his thoughts on Yahoo.

Icahn launched a hostile takeover effort of the Internet giant after it rebuffed Microsoft’s buyout proposal. Icahn felt Yahoo’s actions were not in the best interests of its shareholders, of which he is now of the of the largest, and hopes to negotiate a deal with Microsoft if he is successful.

“Absurd” is an important word for Icahn. He uses it in the title of no less than three posts this week. All of them about Yahoo.

It seems pretty clear to me from these posts that Icahn thinks he is Gordon Gekko, Michael Douglas’ corporate raider character from the 1987 film Wall Street. 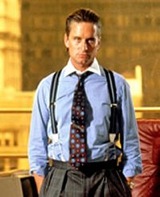 Unfortunately, none of his rants are nearly as good as Gekko’s “Greed is good” speech given at the board meeting of Teldar Paper.

Instead, Icahn finds himself quoting Winston Churchill or better yet, himself, all too often.

Still, it’s an interesting look into the mind of a very powerful man. Check it out, and if you like it, follow Icahn’s advice and “please subscribe.”