Video game publisher SouthPeak Interactive has raised $12.9 million in a PIPE (private investment in public equity) transaction to finance a wide variety of indie games for consoles and the personal computer.

The company stands out in that it has been able to raise money from venture capitalists to participate in the making of mainstream games for the PlayStation 3, Xbox 360 and the PC. To date, most venture funding has been for online games, casual games, virtual worlds and social networking games.

Normally, we run funding stories as short items. But in this particular case, how the company got the financing is a rather complicated story, and a rather unusual one, too.

SouthPeak started raising money last fall, said Terry Phillips, chairman of SouthPeak based in Midlothain, Virg. But in January, the company announced it would be acquired by Global Services Partners Acquisition Corp., a “special purchase acquisition company.” Such companies raise money from investors and then spend it on some kind of acquisition, thereby allowing a private company to go public without IPO hassles. They’ve been dubbed “blank check IPOs” because investors don’t know what company they’re buying ahead of time. 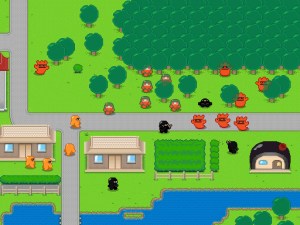 But Global Services’ investors balked at the deal and didn’t approve it. Phillips said that investors liked SouthPeak as a company but didn’t necessarily like the structure of the previous deal. That was a reflection of the worsening credit crunch during the time of negotiation. (Pictured: scene from SouthPeak game Ninja Town).

In April, the deal was restructured as a reverse merger, where SouthPeak essentially went public by acquiring Global Services, the company that originally intended to acquire SouthPeak. Such transactions are usually reserved for penny stocks. The net result was the same, with a company named SouthPeak Interactive going public.

All the while, SouthPeak was raising a round of venture money from some of the same people who were investors in Global Services. After SouthPeak went public, this essentially turned into a PIPE transaction.

The investors include Phillips, Melanie Mroz, Gregory Phillips, Andrea Gail Jones, and Abhishek Jan. Phillips said that the company publishes games that are developed by other companies. The company tries to find hit titles by finding both talented developers and properties on which to base games. Its biggest hit to date is “Two Worlds,” a fantasy game on the Xbox 360.

Phillips said the company is targeting earnings before income and taxes of $4.5 million and revenue of $30 million for the fiscal year ending June 30. He said the company reduces its risk by outsourcing game development to independent developers in Australia, Canada, and Hungary. Big titles coming include sequels to Two Worlds, as well as “X-Blades” and the “steampunk fantasy” game “Edge of Twilight.” (Think “BioShock,” for weird, Victorian-style fantasy games).

The company has 30 employees, mostly in Virginia. Phillips and his brother Gregory bought SouthPeak in 2000 for $7.5 million in cash. They got back into game publishing in 2005.