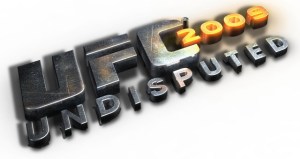 LAS VEGAS–THQ made a big splash at The Palms Casino Resort this past weekend, inviting about 100 sports, video game and mixed martial arts (MMA) journalists to an exclusive first look at “UFC 2009: Undisputed.” The first game out of THQ’s five-year exclusive licensing deal with Zuffa LLC, which owns Ultimate Fighting Championship (UFC), will ship for PlayStation 3 and Xbox 360 in May or June 2009. The mature-rated game will feature over 80 UFC fighters from five weight classes and introduce brand new game technology that looks solid even at this early stage of development. With UFC President Dana White in attendance, along with fighters Quenton “Rampage” Jackson and Forrest Griffin, the event also showed the type of synergy that will take place between the game publisher and the leading MMA brand. Tracy Williams, director of global brand management at THQ, was on hand to give an exclusive sneak peak into the future convergence between the real pay-per-view UFC events and the virtual games.

Q: What kind of collaboration do you see between UFC and THQ moving forward?

A: I think in terms of the TV shows, UFC has a partnership with SpikeTV, so we’re working with both companies to do different programming for “The Ultimate Fighter” show and also the pay-per-view events. The trailer we showed today for the game was hyping the upcoming July 5 pay-per-view fight between Quinton “Rampage” Jackson and Forrest Griffin.

Q: Since UFC is a sport versus WWE’s sports entertainment, will you be able to integrate UFC video game footage into TV programming like we’ve seen networks do with Madden gameplay in NFL telecasts?

A: We’re hoping so. Some of the cool stuff we’re trying to do is working with the UFC PR and marketing guys as early as possible. The whole event that we had today was planned six months ago. We were really trying to gauge at what point the game would be ready to show and have an engaging trailer on our side. And UFC focused on which fighters would best fit for the game event and tie it into the pay-per-view match. We really try to work with them as closely as possible. The nature of their sport is very dynamic and unpredictable and we have to be very nimble…much more so than we are with our WWE products. 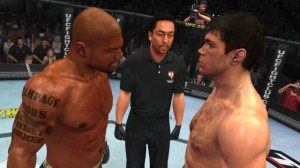 Q: WWE has Wrestlemania every year, which is a pay-per-view event that’s similar to the NFL’s Super Bowl in terms of awareness. Does UFC have something similar?

A: No, in fact they would love us to do big game events for every one of their pay-per-views. We’re very excited about their enthusiasm, but at the same time we have limited resources. Where we might do a Superstar Challenge to kick off Wrestlemania weekend with WWE, we’ll probably pick more strategic UFC events. We really focused on the finale of “The Ultimate Fighter” TV show for this event. “UFC 2009: Undisputed” is going to ship around the season finale of season nine of “The Ultimate Fighter,” so we’ll probably do something around that. There are seasonalities we can track, as well as the ratings of the SpikeTV show, so we can target when people are really focusing in on the brand.

Q: What does UFC open up in terms of marketing to sports outlets?

A: Because MMA has become a mainstream sport that’s covered by outlets like ESPN, Sports Illustrated and newspapers and Web sites, we’ll have access to a lot more outlets than we do with WWE.

Q: From a video game standpoint, we’re seeing a lot more games being released outside of the fall window, which is when your WWE games ship. What impact do you see this release having with UFC?

A: Because we have WWE products releasing in the fall, we want to strategically manage how we release our schedule. Even though WWE and UFC are not competitive brands, we don’t want to release two fighting games within the same window. We do a lot of market research and we know there’s a threshold of about three months between major releases of like-kind games that gamers are willing to purchase. That’s why we have “Smackdown vs. RAW! 2009” shipping in November, we have our new “Legends of Wrestlemania” game releasing in March and our new “UFC 2009” game shipping in May/June 2009.

Q: What kind of crossover have you found between WWE and UFC fans?

A: WWE tends to skew a little bit younger, while our UFC game is targeted at an older Mature gamer. We don’t want to have exactly the same types of games competing with each other.

Q: What type of reach does UFC have outside of North America?

A: They’ve done some events in the U.K. Michael Bisbing is a really good fighter from an “Ultimate Fighter” show that was done in the U.K. I would expect that they’ll get more and more international exposure as they sign additional TV deals around the world. Our game will go all over the world. I was in Europe last week and the international retailers I met with don’t even get UFC programming in their countries but they bootleg it or watch it on the Web or buy it on DVDs. The UFC guys have opened up an office in London so they have a whole international sales and marketing team that are focused on growing the brand in Europe, but UFC also has a hold in Japan because of the PRIDE Fighting Championship business that they purchased.

Q: How will the video game help grow the UFC brand in new countries?

A: THQ has offices in territories that UFC doesn’t have shows on the air, so in many places the game will be the first exposure people have to the sport. WWE has been a company that has grown internationally, but because we have offices all over the world, we were able to get our WWE games out and build awareness for the brand well before they ever got on TV. We’re going to follow those exact practices with UFC. We have all of the lessons we’ve learned with WWE that we can apply to UFC.