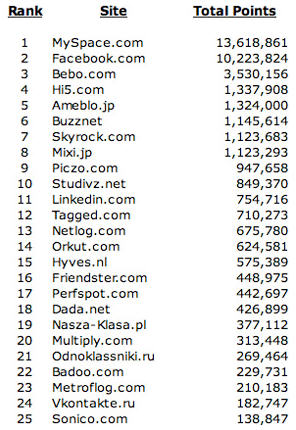 Is social networking company MySpace really more valuable than Facebook, just because it has more traffic in the large, lucrative U.S. market?

Yet that’s the argument Techcrunch makes, in a piece that argues MySpace has the edge because advertisers spend more money online in the U.S. than in most other countries. Each U.S. user is more “valuable” than, say, a user in India or Canada, Techcrunch argues, because advertisers spend a lot less on each online user in those countries. So while Facebook may have surpassed MySpace abroad in overall usership numbers, MySpace is still more valuable, Techcrunch asserts (see the chart at left, for Techcrunch’s results).

It’s important to acknowledge, as Techcrunch does, that markets are unequal, and so a look at simple user numbers isn’t good enough when trying to put a value on companies. However, there are big flaws with Techcrunch’s analysis, even if the point about market ad dollars is a solid one.

The problem is that it focuses only one aspect of inequality: national markets. There are many other aspects of inequality. One is the type of user.

There is strong evidence Facebook users enjoy higher income levels than those of MySpace because Facebook started among those who attended top universities. Advertisers may be more willing to target Facebook’s users than MySpace’s users. And in so doing, they may spend more money on Facebook, which makes Facebook more valuable. VentureBeat’s Eric Eldon wrote about this recently and provided other reasons why Facebook’s network is more valuable, everything equal.

Another flaw in the Techcrunch analysis is that it’s static. It looks at statistics today and locks the social networks into a value based on those stats, even though there’s evidence Facebook is growing more quickly than MySpace — and even in markets where advertisers spend more per user than in the U.S. For example, Facebook has surpassed MySpace in Australia (as Andrew Chen points out), where advertisers spend $148 per user, more than U.S.’ $132 per user, according to Comscore and PricewaterhouseCoopers data. Any assessment of value needs to take into consideration future worth. Any Wall Street investor would tell you that.

Indeed, Wall Street takes these and other factors seriously when valuing companies. Wall Street will value a social network like LinkedIn much higher than other larger networks, even though LinkedIn’s reach is smaller, for example. That’s because LinkedIn’s users are more professionally focused than those on other networks frequented by teenagers (such as Bebo). Techcrunch mentions the LinkedIn case as a “caveat,” however I’d argue it’s fundamental. For new media companies, Wall Street regularly looks at data such as “revenue, “EBITA,” “growth rate” and “market position” (whether you’re first, second or lower in market share), all of which are ignored by a mere look at a country’s ad market size. LinkedIn has long said it is profitable and making considerable revenue (it says it will have $100 million in revenue this year). Compare that to networks a lot larger in reach that aren’t profitable and not making half that revenue.

Bebo is mentioned by Techcrunch as an example of a company valued lower per user than Facebook. However, Techcrunch’s analysis doesn’t explain why. There’s a reason Bebo is valued lower: Namely, its users offer less value to advertisers.

It’s also pretty well accepted that only the top five or so players in any given market really matter. The leading player, by market share, is usually assigned a higher value “multiple” than the second place player (this premium can be 50 percent or higher). The second player in turn is awarded a higher multiple than the third, and so on. Below No. 5, the multiples drop significantly. That’s because the branding and other network effects provided by being a leading player give the company advantage over time. This factor may or may not affect MySpace and Facebook values (the confusion about their relative ranking would suggest that MySpace does not yet deserve a higher multiple, given our points No. 1 and No. 2 above). However, it does mean that Techcrunch’s point system for the lower players doesn’t really make much sense.

There are so many other things that need to be taken into account, too, such as user engagement, how much time users spend on the site, etc. All these are different across networks.

4. CONCLUSION: FACEBOOK’s VALUE MAY MATCH, OR EVEN EXCEED, THE VALUE OF MYSPACE

So where does this leave us? I’d argue that Facebook’s higher income users in the U.S. offer it a decent premium per user relative to MySpace. There’s no convincing evidence to suggest that MySpace is more valuable than Facebook. MySpace has more revenue than Facebook, but it is a lot more mature (has been around longer) than Facebook, and its parent company (News Corp.) is a giant media company that has had more time to try to monetize it. The jury is still out.