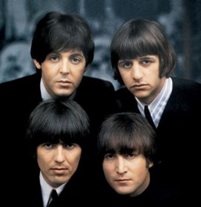 When you think about the 21st century digital lifestyle, The Beatles aren’t exactly the name that first jumps out at you. After all, the group still doesn’t have its music catalog for sale in any digital format.

But now, the biggest rock band of all time is apparently ready to embrace technology as the parties in control of The Beatles’ master recordings are in talks with video game makers, according to The Financial Times.

When you think of music and video games you probably think one of two things: Rock Band or Guitar Hero. Sure enough, both MTV Games and Activision, those games’ respective parent companies, are said to be discussing deals with Apple Corps (not to be confused with Apple Computer) and EMI, the two companies managing The Beatles’ music rights

So will you be playing some solos from “While My Guitar Gently Weeps” on Guitar Hero or rocking out with your friends to “Helter Skelter” on Rock Band anytime soon?

If the supposed deal to bring The Beatles to iTunes is any indication, no.

At nearly every Apple event over the past two years, talk begins swirling that the band is going to launch its catalog on the number one digital music retailer. (Apple chief executive Steve Jobs is a self-confessed Beatles fanatic.) That has yet to happen despite every member of The Beatles’ solo recordings being available on the service.