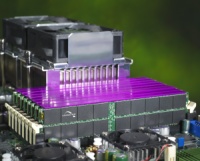 Data centers suck up a lot of electricity. That’s a point that has been well made in the past few years, with a host of startups offering everything from virtualization to water cooling to help tackle heat issues and high electricity usage. Now Flash memory maker Spansion (NASDAQ: SPSN) and Virident, Bay Area startup, are saying they have the next big solution.

That solution is a new type of memory to replace DRAM, a dense form of random access memory that’s heavily used by some kinds of servers. Like most computer parts, DRAM is an energy sink, especially when companies like Google pack a lot of it together in close quarters. Spansion and Virident propose replacing it with a special kind of Flash memory called EcoRAM.

According to Spansion, DRAM uses the second-most power in servers after the processor itself; EcoRAM, it says, can greatly reduce that power usage. Part of the improved power profile is the smaller die size of the NOR-based memory, which also allows more to be placed in a single area, in turn resulting in fewer servers and less expensive support infrastructure. “The density we allow is absolutely phenomenal,” boasts Virident’s CEO, Raj Parekh. (See below for partial cost estimates compiled by the company.)

EcoRAM, which is based designed into Virident’s special GreenGateway platform, isn’t good for every kind of server; it’s most useful for instant retrieval of data, as in search queries, rather than large deliveries like videos. Nevertheless, there are millions of servers in the world that could, if Spansion’s numbers stack up, greatly benefit from EcoRAM.

That doesn’t mean the new memory will necessarily succeed. New memory and semiconductor designs come and go, with some seemingly brilliant designs failing regardless. But luckily for Virident, its larger partner has a special incentive to develop a hot new product line: Spansion’s stock price has plummeted from a 52-week high of $11.90 to a recent low of $2.64 following bad earnings news.

Meanwhile, Virident still owns its own part of the technology. The Los Altos, Calif. startup raised about $13 million in initial funding last year.