The Novint Falcon is an entirely new type of interface for PC games. It’s a small robot that lets players feel 3-D touch sensations in games that exploit its features. I thought it was cool the first time I saw it, and it drew a lot of attention at the 2007 Consumer Electronics Show. But I also knew the company would have an uphill climb convincing game developers to exploit the newfangled device.

Still, the Albuquerque, N.M.-based Novint Technologies has done a good job getting the gadget off the ground. Today, it announced that marquee game developer Valve will add support for the Falcon to a number of games. 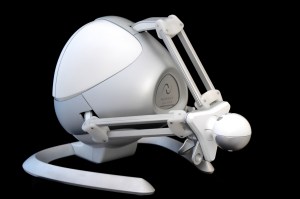 Gabe Newell, Valve’s president and co-founder, said in a statement that new interfaces are changing gaming and the Falcon adds a new level of interaction, adding force feedback while maintaining controls as accurate as a mouse. Under the deal, a new update will be sent through Valve’s Steam online gaming service to add compatibility for the Falcon for games such as “Half-Life 2: Episode Two,” pictured below.

This means that in first-person shooter games, users may feel a weapon recoil, enemy attacks, vehicle movement, and interactions with the environment. Novint is also taking reservations for a bundle of Valve’s “The Orange Box” series of games and a new Black Falcon with a pistol grip for $189. 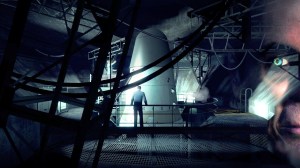 The Valve deal on its own is impressive. But Novint has also managed to get the current $189 Falcon into chains and e-commerce sites including Tiger Direct, Fry’s Electronics, J & R Music, CompUSA.com, CircuitCity.com, and Amazon.com.

Earlier this month, Novint also secured a $5.2 million convertible debt financing at a 7 percent interest rate. No payments of principal or interest are due for three years. No interest is charged the first year.

The company also announced earlier this year that Electronic Arts will support the Novint Falcon in its game franchises, including “Tiger Woods PGA Tour 08,” “Need for Speed,” “NBA Live,” “Madden NFL 08,” and “Battlefield 2.”

Novint originally designed simulation systems for Lockheed Martin, Chrysler, and Chevron. In 2003, the company developed medical software with the University of New Mexico for training doctors in administering delicate injections. Using the Novint technology, a medical student could feel what it’s like to inject a needle through flesh. A year ago, Novint released the Falcon game controller with the globe-shaped handle that a player grabs and pushes. It hasn’t been an easy sell. The company lost $1.8 million in its most recent quarter ending March 31. Sales were only $72,000. The company’s stock is traded over the counter under the symbol NVNT.