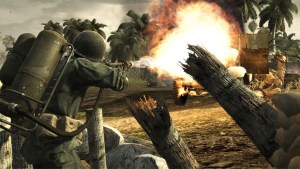 As the video game industry gears up for its annual E3 conference in July, the reality is setting in that the one-time entertainment extravaganza has become narrowly focused on console games, with very little room for PC games.

Even Microsoft and Intel, the champions of the PC, have conceded that point. Intel isn’t holding any press conferences or functions at the show. And Kevin Unangst, senior global director of Windows gaming at Microsoft, said his team decided to show off PC games at an event in San Francisco this week to avoid being overshadowed at E3. (Unangst pictured below).

“As it has morphed, E3 has fundamentally become a console show,” he said. “We didn’t want to just squeeze out some time at a console show.”

The absence of PC games goes along with the absence of a lot of other things at the show. E3 drew 70,000 people a couple of years ago. But big companies balked at the costs and downsized the show to a gaming press event. Now with just a few thousand attendees, the show is much more focused. That leaves some nostalgic.

“E3 used to be the mecca of gaming,” said Rahul Sood, head of Hewlett-Packard’s VoodooPC game computer division. “I’m skipping it because it’s not what it used to be. Now it’s just an event called E3.”

Separate from the issue of PC versus console games, a number of companies have pulled out of the Entertainment Software Association that sponsors the show, including Activision, LucasArts, Vivendi, id Software and Crave Entertainment. Some of the companies will either still be at the show or show off games nearby.

Still, the low visibility of PC games could be yet another blow to both the show and the ESA itself. E3’s troubles are so big that Gamecock, the resident clown of the game industry, is staging its own BE-3 initiative (i.e. publicity stunt) and Mike Wilson, “grand champeen” of the company, is running for ESA president on a platform of “bringing fun back to the industry.”

Even with the smaller crowd, Unangst said it’s hard for PC games to get any attention at E3, which runs for the press only from July 14 to July 17 at the Los Angeles Convention Center. Don’t expect Microsoft itself to talk much about PC games at its own E3 press conference, where it will tout the Xbox 360’s games. Unangst and company will hold a small reception on July 16 at the show.

Problems such as piracy have hurt the PC, prompting many game developers to move into console development. Categories that were once the domain of the PC – shooters and real-time strategy games – are now available on the consoles.

But that doesn’t mean that PC games are dead.

“There have been a lot of trend pieces about how PC gaming is dying when that is absolutely not happening,” said Unangst. “It’s growing exponentially, thanks to online games, and even faster than the rest of the market.”

One of the hot categories on the PC, social gaming, isn’t even being measured. But indications are that it’s a hot sector. (The Social Gaming Summit last week drew almost 400 people to San Francisco). Subscriptions to World of Warcraft, the PC role-playing fantasy game, have topped 10 million, accounting for a huge growth in the PC game market. Unangst said that the Windows-based PC is the biggest game platform in the world. That’s if you consider the Nintendo Wii, Microsoft Xbox 360, and Sony PlayStation 3 as unique platforms.

The Nintendo Wii enjoyed outstanding sales growth last year, and received most of the attention. But as a whole Unangst said PC games were bigger than the Wii’s sales. Console platforms as a whole are a bigger category at $14 billion worldwide, compared to $11.3 billion worldwide for PC games.

In the U.S., console games have been growing at a faster rate than PC game sales at stores. But Unangst notes that the PC game numbers don’t include game advertising, purchases of downloadable games, and online game subscription revenues.

At Wednesday event, game companies showed off 16 new PC titles, while Nvidia and Advanced Micro Devices showed off computers with the newest graphics chips. The small event is another piece of Microsoft’s campaign to bolster the image of PC games, an effort that began with the launch of the “Games for Windows” brand in 2006.