One of the relatively few disappointments about the iPhone 3G unveiling at Apple’s WWDC event earlier this month was that there was no indication that the new phone would finally support Multimedia Messaging Service (MMS) messages. The fact that such an advanced phone can somehow not include this fairly standard functionality has been an annoyance of iPhone owners since day one.

A new rumor popping up just two weeks before the iPhone 3G launch suggests that could change.

An internal AT&T memo in circulation right now supposedly lists MMS messaging as a feature of the new iPhone, according to the iPhone news site iPhone Atlas.

Lending some credence to this rumor is the fact that AT&T still hasn’t officially announced its messaging plan for the iPhone 3G. We know that unlike with the first iPhone, 200 free text-messages will no longer included with basic plans. We’ve written that this is the true rip-off of the new iPhone (as opposed to paying more for the 3G data) on AT&T’s behalf because it will likely add at least $5-$10 on to your bill each month for a minimum amount of texts.

It’s pure speculation, but perhaps AT&T has unbundled the messages because of this new ability to send pictures and possibly video alongside text. Of note however, is that Apple’s website for the iPhone 3G still only make reference to SMS messaging, not MMS.

My old Motorola RAZR phone could handle MMS message just fine. So why that computer in my pocket, also know as the iPhone, can’t do so is beyond me. 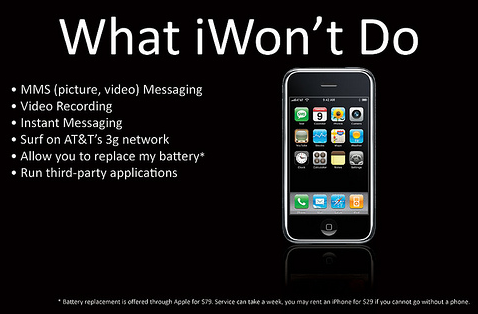 The image above represents what many felt the original iPhone lacked. Apple has taken care of the 3G part and the third-party applications part, could MMS be next?