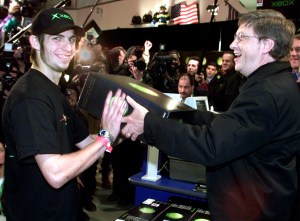 I tried to resist writing an ode to billyg. But the Borg effect has taken hold and I’ve got to join the legions of journalists with paeans to the god-of-I-don’t-know-what. If anybody should do it, it’s me. After all, Gates gave me material for two books.

Bill Gates is retiring from full-time duties at Microsoft today with a better reputation than ever. People know him now as a statesman of the industry, not the little punk who got rich with monopolistic behavior. He is the CEO who is creating jobs in China in the hopes of lifting everyone’s standard of living, not the kid who is whining about software piracy. And he is the world’s most generous philanthropist trying to save the developing world from health maladies, not the guy trying to choke off Netscape’s air supply.

Everybody has an opinion about whether Gates is a good guy or a bad guy. But there is no doubting that his image is a lot different than in 2000, when Ken Auletta painted an unflattering portrait of Gates in his book, “World War 3.0,” about the Microsoft antitrust trial.

A lot of this started with Xbox. For Gates, the 1990s were about keeping the government at bay in the antitrust lawsuit. He didn’t do so well. He came off as petty. As Steven Levy of Newsweek recounted, Gates threw a pencil at Levy during an interview in which they were debating the meaning of the word “antitrust.” That was the kind of thing you expected from Gates. The world had adopted a “containment” policy against Microsoft, making sure it never gave Gates the opening that IBM did when it hired Microsoft to build an operating system for the personal computer.

But with Xbox, Gates had a chance to play the white knight. When Sony started dropping hints about the PlayStation 2 in 1998, Microsoft went into a panic. Sony’s executives were boastful. Soon, they were saying it was going to be the comet to wipe out the dinosaurs and was “more than a PC.” Microsoft had to defend the living room, and Gates’ attempts to partner with Sony fell flat.

A small team led by Seamus Blackley, Kevin Bachus, Otto Berkes, and Ted Hase started agitating from the working ranks of Microsoft to create Microsoft’s own game console, the Xbox. One by one, they brought aboard fellow crusaders Ed Fries, J Allard, Cameron Ferroni, Rick Thompson, and Robbie Bach. Gates was the easy sell, while Steve Ballmer put the squeeze on everyone to build a real business.

The more they toured the industry, the more they found that game developers felt oppressed by the dominant companies, Nintendo and Sony. Microsoft had a crack in the door. It asked developers what they wanted in a game console and tried to give them everything they wanted. The Microsoft team greenlit a lot of games in the hopes of unleashing creativity. And they could build a platform where everyone (except Microsoft itself) could make more money, create the game they wanted to create, and force the Japanese rivals to be more competitive.

In 2001, Blackley walked out on stage with Gates at the Comdex trade show. In the midst of the huge MGM Grand boxing arena, Blackley held the Xbox above his head and got a chant going, “Xbox, Xbox, Xbox.” When it went on sale, Gates handed over the first box to an anxious buyer in Times Square in New York (pictured). Gates and company had finally done something cool.

That’s the sanitized version of history, for sure. But it could be called a turning point for Gates’ image. It was probably the first time anybody waited in line to buy one of his products at midnight (at least with good reason). And the first time that he could be identified with something that was cooler than anything Apple’s Steve Jobs was doing.

During these snapshot moments, I had a chance to meet with Gates. He threw private dinners at trade shows and receptions where he patiently answered every question coming from a circle of journalists. I found that he had a sharp mind and was funny. He could mock somebody or imitate them. But he managed to make the comments seem humorous, not just mean.

These days, Gates doesn’t rock maniacally when he’s interviewed. He has a sense of humor. He got the same rock star treatment when he launched the Xbox 360. Not everything has gone right for Gates since then. People weren’t happy with the Xbox 360 defects, the flaws in Windows Vista, and the drama of Microhoo has had its missteps. But people aren’t necessarily throwing darts at Gates for that.

Gates just doesn’t inspire the same fury or mockery that he did when he was in his younger years. I guess that’s what Ballmer is for now.