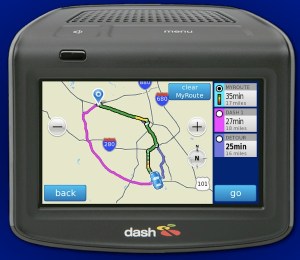 Unlike other car navigation devices, the Dash Express has built-in wireless networking so that it can update its software with new features. Today, Dash Navigation is announcing its first update, which will make the device much smarter.

The two-way global positioning system (GPS) device will now have a feature called MyRoute. If you drive a regular route, such as to work, you can ask the device to memorize the route, which is then highlighted in pink on the device’s map. The device can look at traffic data and decide whether your route is the best way to go on a particular day.

Another cool feature of this update is the ability to make Yahoo Local search results more relevant to your particular commute. If you use the “Search Along Route” query, the results will come back based on how close they are to your MyRoute. You can thus find all of the places that, for example, serve a mocha along your drive.

The $299 Dash Express will update itself wirelessly. It has built-in cell-phone connectivity and WiFi access. That means your car can download the update while it’s parked outside your house if you have a WiFi router at home. 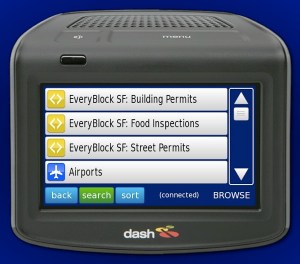 The update also has a new GPS fix called FasterFind. This is a software update built into the latest Sirf Technology chips that enables a GPS device to get a fix in a few seconds. The Sirf InstantFix technology makes calculations based on its last known location, its connectivity to satellites, and other tricks to speed the time to fix. That helps when you’re near trees or in a dense urban environment and can’t get a direct satellite connection.

Lastly, Dash sped up the software in the device so that it can draw its maps 50 percent faster. People who pay Dash a $12.99-a-month subscription can receive ongoing software updates throughout the year including historical traffic information from the Dash Driver Network, new features, software improvements and updated maps.

There are now 30 partner-created DashApps available for the device. One of the newest is EveryBlock, which collects and publishes neighborhood news in cities such as Chicago, New York and San Francisco. It sends data on local crimes, restaurant inspections and building permits as well as user-contributed knowledge.