More than 22,000 Canadians revolt against monopolistic iPhone rates — Rogers, the telecommunications company that holds a near-monopoly in the Canadian mobile market, is facing a revolt from users who were looking forward to getting 3G iPhones. Its terms include a mandatory 3-year contract, as well as limited calling time, text messages, and a limit on the new phone’s data transfer, with accompanying fees if you go over on anything.

In other words, Rogers wants to scalp anyone who tries to use the iPhone for its intended uses, like browsing the web — undermining Apple’s own ads showing freewheeling mobile web browsing on the phone. A number of sites have popped up to protest. The largest one, ruinediphone.com, has gained more than 22,000 petition signatures so far. See Techmeme and Fortune’s Apple 2.0 blog for more.

Record label EMI goes after social network hi5 and others because its users uploaded some pirated old songs — These songs aren’t modern hits, they’re the songs you don’t admit you used to listen to, like anything by Paula Abdul. They’re also EMI property, and hi5 users were uploading them without EMI’s permission. CNET has more.

Seedcamp, a European event for startups, is now accepting applications — You can apply here.

Early BitTorrent administrator facing 10 years of jail time — 26-year old Daniel Dove was a long-time lead administrator at an illegal file-sharing site that used BitTorrent technology to do things like share pirated copies of the Star Wars movies before they came out. Movie and music industry lawyers have put together evidence of his actions that the federal government is using to prosecute him. Now he’s facing sentencing.

Large tech companies band together to fight other potential patent holders — The Wall Street Journal has the details. 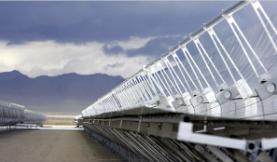 The Bureau of Land Management freezes new solar plant development for two years while it does environmental impact reports — Some startups call this announcement a “setback”, some are saying it’s a boon because the application process will be overhauled in the meantime. The decision won’t be crippling to most of the startups we write about; panels makers will be okay for the moment, while big solar thermal guys like Ausra and Brightsource already have their hands full with planned projects.

Rhapsody makes the move to DRM-free music — It thinks it will be able to compete with Apple’s iTunes Music Store in doing so, according to The New York Times. Hey, dream big. Right?

[Solar photo via NYT, via Reuters, via the Las Vegas Sun.]