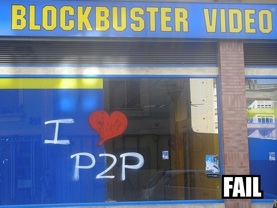 Blockbuster today issued a one paragraph statement to announce it was withdrawing its proposal to purchase electronic retailer Circuit City. This is the way a takeover bid ends. Not with a bang, but with a whimper.

Citing “market conditions,” Blockbuster determined it wasn’t in its best interest to purchase the struggling chain. Those market conditions likely being that both companies stocks are in the tank.

When Blockbuster made its initial bid in April, Circuit City’s stock was around $4-a-share. Immediately after the proposal was announced, it jumped to $5-a-share. Now it’s around $2.50-a-share, almost exactly even with Blockbuster’s stock price as they race each other to the bottom.

Blockbuster is also claiming to have done its “initial due diligence process,” which perhaps means little more than listening to any expert, advisor or analyst who had no idea why it was doing this deal.

The deal was a $6 to $8-a-share cash offer, which could have been worth as much as $1.3 billion. For the deal to work, Blockbuster would have had to borrow quite a bit of money. That would have been risky, especially in this economic climate.

What Blockbuster needs is actual strategy for how it’s going to remain a business going forward. The move to digital distribution is already beginning, and Blockbuster, having slept through most of the DVD rental-by-mail period where Netflix ate its lunch, needs an answer. An answer better than in-store kiosks.

“We continue to believe in the strategic merits of a consumer retail proposition that would bring media content and electronic devices together under one brand. We will pursue this strategy through our Blockbuster stores as a way to diversify the business and better serve the entertainment retail segment,” Blockbuster chief executive Jim Keyes wrote today.

Yeah, good luck with that.

Blockbuster’s largest shareholder happens to be none other than the resident thorn-in-Yahoo’s-side, Carl Icahn. He indicated in the past that if Blockbuster couldn’t do this deal with Circuit City, he may just take the electronics chain over. I don’t know about you, but I’m going to be reading The Icahn Report, Icahn’s blog, tomorrow.