A new independent game development studio, Meteor Games, launched today with Adam Powell and Donna Williams at the helm — the two entrepreneurs who previously launched game company Neopets back in 1999 and then sold it to Viacom’s MTV Networks for $160 million.

The new company is working on a fantasy/sci-fi massively multiplayer online game — a stylistically animated world for children ages 8 to 18 in 2009. That age group is well above the target for Neopets (which has more than 45 million users).

“There is a gap between games like [Funcom’s] ‘Age of Conan‘ and [Disney’s] ‘Club Penguin,'” said Powell. And that’s exactly the gap he plans to focus on.

It’s certainly harder to start a new MMO today than it was back in 1999. There are dozens of companies trying to challenge Blizzard’s “World of Warcraft,” which has 10 million paying subscribers. Gaia Online, which described its own MMO today, will be more direct competition in the MMO space, though Meteor Games is going to shoot for higher graphics fidelity than Gaia Online, which could help the new company set itself apart. Runescape is another casual fantasy MMO that targets a younger crowd, though that game also appeals to a variety of ages. 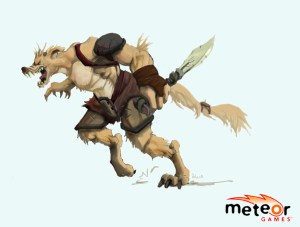 There aren’t many serial entrepreneurs in the virtual world category because it’s really hard to come up with a hit in the first place. But if you’re going to bet on anyone to come up with an encore, Powell and Williams are a good choice.

Powell and Williams probably sold off Neopets too early, considering Disney has since acquired rival Club Penguin for $700 million. But the money they did get was enough to allow Powell and Williams to bankroll their new game so far. They waited to start their game because they had a no-compete clause with Viacom. After that expired, and after they figured out what they wanted to do, they started their new company. In the meantime, they were obsessively playing “World of Warcraft,” creating a dozen “level 70” characters between them. (That means they poured a ton of hours into their, um, game research.)

They have 42 employees in their West Hollywood, Calif. studio. Powell is chief executive and chief creative officer, while Williams is president and chief operating officer. Powell said they are talking to possible investors now but are under no pressure to publish their game by a certain deadline. 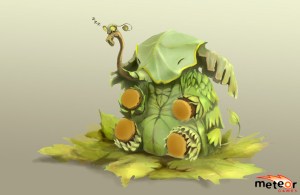 The new game won’t be a simple Adobe Flash-based application played in a web browser (like Neopets and other simple MMO sites). Powell said he looked at the competition in that area and wanted to have much better graphics. Meteor has licensed a 3-D game engine to build the graphics for the world but won’t yet disclose the engine maker. The company will publish the game on its own site.

Meteor will likely have a free version to entice gamers and charge $5 to $10 a month for access to the full world. The company will likely also create a virtual goods model where it can charge for certain items. Williams said the world will combine an MMO, casual game play, and social networking.