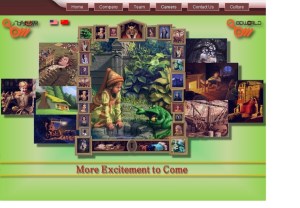 Gaming startup 8D World,  which is currently operating in stealth mode, has raised a first round of funding to create a new virtual world from Spark Capital. The amount is “meaningfully” more than $1 million, according to Alex Finkelstein, a principal at Spark, VentureWire reported.

There’s not much information available yet on the company, but from the art style on its site, it looks like a fantasy massively multiplayer online game, perhaps not unlike the existing casual MMO Runescape or the upcoming Meteor Games world that we wrote about yesterday. The fantasy gaming genre is a crowded one in which Blizzard Entertainment’s “World of Warcraft” reigns supreme with 10 million subscribers.

The most interesting thing about this company is that Rick Goodman is its executive vice president and chief product officer. Goodman cofounded Ensemble Studios in 1995 with his brother Tony, Bruce Shelley and Brian Sullivan. The team created the “Age of Empires” real-time strategy game franchise for Microsoft, which has sold millions of copies.

The story was first reported by the Boston Business Journal. Finkelstein declined to describe the 8D virtual world to VentureWire.  The company plans to launch in Asia and has offices in Boston and China. The chief executive is Alex Wang, cofounder of enterprise software company Emptoris.