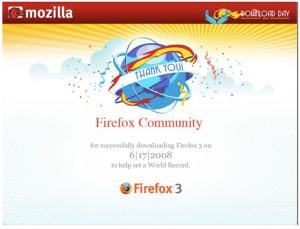 When Mozilla launched Firefox 3, the latest version of its increasingly popular web browser, on June 17, it was aiming to set a new world record for most software downloads in 24 hours. Guinness World Records, the company that adjudicates such gee-whiz world record claims, has just given Mozilla the prize.

Mozilla didn’t just win the record; with 8,002,530 downloads, it went way beyond the 5 million goal that it set for itself. (If you’re one of the people who helped Mozilla win this prize, you can get your own world record certificate here.)

Also of note: The company’s download site crashed out of the gate due to over-the-top demand, and it didn’t start counting downloads until the site came live again.

Firefox now claims more than 180 million users in total, spread across nearly every country, and is on track to gain 20 percent of worldwide market by the end of this month.

I definitely agree with most Firefox users that the new version is a big improvement — especially for Macs. But I’ve drifted back to Camino, which I still find the fastest, cleanest-designed Mac web browser available.