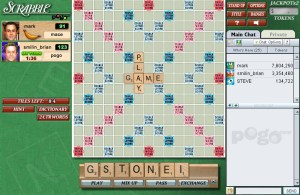 Electronic Arts has taken many months to get its official Hasbro-licensed version of Scrabble onto the Web at Pogo.com and Facebook, but it’s launching the Pogo.com version today and will have the Facebook version out later this month. In the meantime, an unlicensed version of Scrabble created by Jayant and Rajat Agarwalla of Calcutta, India, has been up on Facebook for months getting a giant head start.

The two brothers behind the unofficial version, Scrabulous, are apparently making $25,000 a month from ad revenue, but no doubt they’re going to have to pay a lot back in legal fees. Hasbro sent a take-down notice to Facebook back in January. But Facebook hasn’t taken the turn-based game down yet. The brothers were reportedly trying to sell Scrabulous, but the price was too high.

Scrabble will be the first EA-Hasbro licensed property to go live on a social networking site. It’s late, but at least EA is finally getting into one of the hottest areas of games: the convergence of online gaming and social networking.

EA Scrabble is already available on a variety of mobile phones and on the Apple iPod. EA says the Facebook version has an intuitive interface that allows head-to-head challenges with friends, family and other Facebook users in the U.S. and Canada. There are flexible speed levels and word lists for help choosing words. EA will also let users chat and enjoy dynamic animations. The latter is a feature that Scrabulous doesn’t have.

Mattel and Real Networks have the overseas rights to Scrabulous. Real Networks launched a version of Scrabble, dubbed “Scrabble by Mattel,” in April on Facebook outside the U.S. and Canada. Reports at the time showed that the Mattel-Real Networks version had very little traction.

EA struck its broad licensing deal with Hasbro last October under which EA will make games based on Hasbro’s properties. That puts the official version far behind Scrabulous, which launched in 2006 and still ranks No. 9 on the most-active Facebook applications with 451,107 active daily users.

Gary Serby, a spokesman for Hasbro, said in a statement, “Hasbro has been consistent in stating that Scrabulous infringes upon our intellectual property, and we are keeping our legal options open. Today we are focusing on the coming launch of EA’s legitimate social networking version of Scrabble. We have no further comment.”