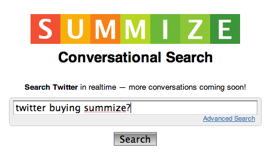 The micro-messaging service Twitter may be looking to buy the Twitter search engine Summize. That’s the rumor that has been floating around the Internet since this morning.

The rumor seems to have originated on a blog written by a person named Josh Chandler, who claims to have a source on the matter. A fairly well-followed Twitter user supposedly tweeted (a Twitter message) the same news, but has since pulled that tweet. Since then it has matriculated up through the ranks.

Certainly such a purchase would make sense. Twitter currently has no real search functionality, and Summize is very good at doing just that. In fact, when Twitter had to disable the “Replies” tab on the site for several days to improve stability, it suggested that users instead use Summize to track replies. Twitter also teamed up with Summize for users wishing to follow news from Apple’s WWDC event last month.

Amid its troubles, I’ve questioned why Twitter wouldn’t simply buy Summize numerous times. After all, it has quite a bit of money now following the closing of its latest funding round.

Lack of search has been a black eye for Twitter for a long time, especially when FriendFeed added the ability to search tweet archives of those users you follow back in March. Other services such as the customer service site Get Satisfaction are also utilizing Summize because Twitter has no search functionality. Now it appears that could be fixed with one purchase.

Getting the instant messaging integration turned back on…that’s another story.

We’ve contacted Twitter on the news and will update when we know more.

update: No word from Twitter yet, but co-founder Biz Stone just wrote a post on the Twitter Blog detailing the companies who access its data via XMPP protocol. Those are Twittervision, Zappos, FriendFeed and yes, Summize.

update 2: A deal is definitely in the works, GigaOm’s Om Malik was able to confirm. It could be announced as soon as next week.