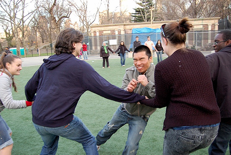 The two key cogs pushing for a Yahoo takeover this year have been software giant Microsoft and billionaire investor Carl Icahn. Even though both wanted the same thing, their timing was always just a bit off. Now the two are teaming up. Yahoo is in trouble.

It’s like the childhood game of Red Rover; Microsoft and Icahn are linking arms and calling for Yahoo to come to their side. But Yahoo likely isn’t strong enough at this point to break the chain.

Icahn issued an open letter to the shareholders this morning explaining how he and Microsoft chief executive Steve Ballmer now see eye-to-eye on what must be done with Yahoo. Microsoft issued a statement five minutes later confirming this stance — which is:

We confirm, however, that after the shareholder election Microsoft would be interested in discussing with a new board a major transaction with Yahoo!, such as either a transaction to purchase the “Search” function with large financial guarantees or, in the alternative, purchasing the whole company.

So, Icahn will take out Yahoo’s legs and then Microsoft will go in for the kill.

While Microsoft working with Icahn has seemed more or less inevitable since May, now that it’s in writing, Yahoo finds itself even further backed into a corner. As such, it should be no surprise that Yahoo spent the July 4 weekend meeting with advisers about alternative ideas, according to the Times Online. The most likely of these alternative ideas is a deal with Time Warner that would merge Yahoo and AOL. 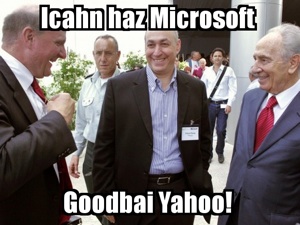 Yahoo also issued its own statement a couple hours after Icahn’s and Microsoft’s this morning. The gist? It remains “open” to any proposal by Microsoft to take over the company but wants a bid immediately (read: While the current board is in place). With only three weeks left before the August 1 Yahoo shareholder meeting, that is unlikely to happen.

Instead, Microsoft will probably sit back and wait for Icahn to replace Yahoo’s board at that meeting with his own hand-picked group. Expect Microsoft to then make a proposal to buy Yahoo shortly thereafter. Yahoo, naturally warns that this is a bad idea for the shareholders.

With the stock price up over 10 percent on this news today. I’m not so sure they agree.