Hundreds of millions of people are using social networks. So, while traditional media weakens and goes through painful transitions, marketers are trying to figure out how to reach these newly-formed, massive and networked audiences. Involver is one of the companies trying to provide an answer. Today, it’s the pilot program of what it calls a “video marketing platform.”

The word “platform” is used by tech companies to mean any number of things. What Involver means by it is that marketers can stick marketing materials inside of online videos, distribute those videos to social network users, and get quantifiable data back about how the videos (and marketing materials) were received, that helps them continually improve their marketing tactics.

A marketer first takes a video they’ve created or gotten from somewhere else, that somehow pertains to whatever they’re trying to market. They load it into Involver’s software, then choose marketing features that will appear within the Involver video player — maybe a quiz, a survey or an email registration form. You watch a video, you take a quiz at the end of it before you decide to click away.

To reach social network users, Involver builds a social networking application around each video, such as this Facebook application for Serena Software, featuring a contrived but somewhat entertaining promotional video that also became popular on YouTube. (Serena is maybe a bit ahead of the corporate curve when it comes to using social networking tools — it also recently scored some nice press because it adopted Facebook for parts of its internal communication). 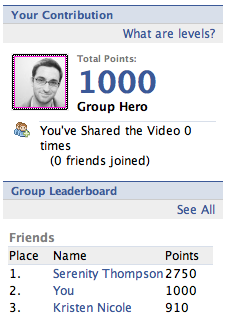 The application includes social features designed to create competition and community among its users. You can get points by getting your friends to do things like watch the videos. Those who get the most points are featured on a leaderboard in the application. This game-like feature can be seen in many Facebook applications. Involver also says it’s working with other Facebook application developers to get its videos into their applications.

Note: As with many point-driven Facebook applications, I’ve already been ratcheting up my score on Involver’s Serena application and I haven’t done a thing (I think?). See graphic.

Involver also provides an administrative section, so a marketer can track the video marketing application’s performance for things like how many users are watching the video the whole way through and then taking the entire quiz.

In sum, this is an early effort to create a way for marketers to track their effectiveness in reaching social networking users. Many large Facebook application developers are also experimenting with new forms of marketing and advertising through their applications, as is Facebook and its social networking rivals.