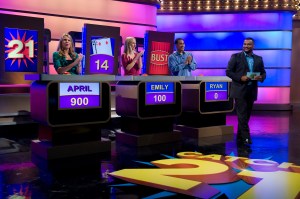 The borders between media are porous. WorldWinner, an online skill-based game company, proved that today when it announced that its “CATCH 21” game will become a TV show on the GSN channel shown in 68 million homes.

GSN airs only game shows and is jointly owned by Sony and Liberty Media, which bought WorldWinner’s parent company last year. The show will be broadcast on weekdays starting Monday July 21 at 7:30pm Eastern time. The series is expected to go for at least 40 episodes.

“We thought this would be a great way to make TV viewers into contestants and game players into TV watchers,” said Peter Blacklow, president of WorldWinner (pictured below).

The TV version of CATCH 21 was created by Merrill Heatter, who has created game shows such as “The Hollywood Squares,” and Scott Sternberg, whose credits include “The Gong Show.” Actor Alfonso Ribeiro will the game show host. The game is a variant of BlackJack where three contestants compete by speeding through a deck of cards to get as many “21” hands within a time limit. They can make their opponents weaker by passing them bad cards.

The game debuted in 2000 as one of WorldWinner’s original skill-based online games. In such games, players compete against each other for prizes or in tournaments. Since the games involve skill, and not chance as in gambling, the prize-based gaming is considered legal. The game still draws considerable traffic in the hundreds of thousands and is available on GSN.com, where players can download it and play along with the show, competing for cash and prizes. CATCH 21 also available on mobile phones through Cellufun and on AOL’s Games.com site.

With cross-media promotion, WorldWinner is going to be tough to beat.  That’s why I said last week that German challenger GameDuell may have a hard time coming into the U.S. market to compete with Worldwinner and its other rival, King.com.