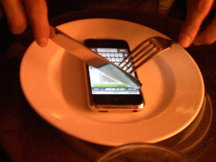 Amid a flurry of bad press surrounding their ridiculously overpriced iPhone 3G plans, Canada’s Rogers Wireless shifted its policy. Instead of offering up 400 megabytes of data a month (a laughably low amount) on its $60 a month plan, Rogers will serve up 6 gigabytes of data with its plans for users who sign up before August 31.

It looks like Rogers may have woken up yesterday and discovered the Internet where absolutely no one had anything nice to say about them regarding this policy and tens of thousands of users were planning a boycott.

Rogers will now also be opening six of its Rogers Plus stores across the country at 8AM local time on Friday so buyers will be able to get their hands on the iPhone 3G at the same time that their American counterparts will.

Considering that this offer is for a limited time only, that this is the first time the iPhone is available in Canada and with reports already popping up of limited supply, if you want an iPhone and live in Canada, I suggest you get to one of those six stores — like, now.