When Yahoo launched SearchMonkey, it gave site owners and developers the means to control the appearance of Yahoo Search results. It seemed only a matter of time before it made the next big step and tonight, it is doing exactly that. As this story goes live, Yahoo will be opening up its search platform to outside developers, giving them access to its infrastructure, index and, most notably, the order of its results. This is called BOSS (Build Your Own Search Service) and could be a really big deal.

Google has over 68 percent of the market and is the nearly uncontested leader of search. Its position, which strengthens every month, appears indomitable. With this move, Yahoo seems to be signaling simultaneously that it has essentially given up hope of taking back significant market share on its own but that it will not go gentle into the night.

The goal is simple: Open up multiple fronts to hack away at Google from every angle in the hope that something gives. To do this, Yahoo is taking a few different tacks. The first is its Application Programming Interface (API), which lets any third party developer build on their own search functionality on top of Yahoo’s. The second involves exposing its innards to computer science departments at reputable universities — potentialy leading to new research and possible innovations. The last is BOSS Custom, a program for full-scale collaboration with larger companies that have significant amounts of their own technology and infomration that they can now add to search results. These companies, which might not want to sink scores or hundreds of millions of dollars into a full-scale search engine of their own, could leverage their data with Yahoo to re-rank and present results in new ways.

As examples of these possibilities, both Hakia, a much-hyped natural language processing search, and Me.dium, whose browser plug-in lets you see and chat with other users surfing the same sites as you, are launching on BOSS Custom tonight. While we didn’t get a chance to see the new Hakia, we did get a look at Me.dium’s search engine, and it suggests that BOSS could lead to some interesting things.

Me.dium’s browser plug-in, which has around 80-100 thousand active users per day, has been busy collecting data on these users’ browsing patterns. With this data, Me.dium organizes results based on a new kind of relevance, one that is not focused on links and keywords, but actual user activity, which Me.dium calls “crowdrank.” Crowdrank looks at traffic patterns — both overall and current — to determine what is hot at the moment the search is executed. 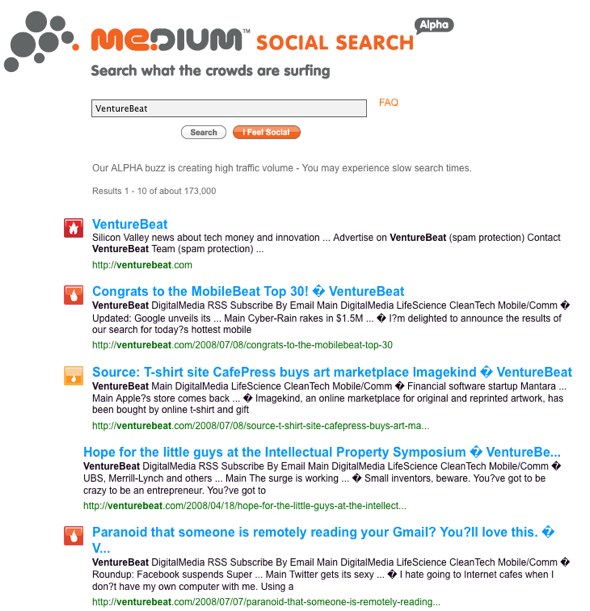 For example, a query for “VentureBeat” on Me.dium’s search will mostly turn up the most popular stories of that moment — currently our recent breaking story on CafePress and another on Gmail’s new privacy features. The same search on Google produces very few actual VentureBeat stories but many sites that mention us.

When Me.dium does not have enough data on a search, it automatically defaults to Yahoo’s standard results, meaning that, at worst, the results will be at least as good (or as bad?) as Yahoo’s own. Me.dium only began the integration with Yahoo within the last couple of months, and its search is still rough. As it accumulates more data and more fully embeds itself within Yahoo’s platform, I expect its results will become more useful.

The question that hangs over Yahoo, BOSS, and Me.dium is whether or not any search player will really be able to change user behavior and get people to consistently use something other than Google; the results would probably have to be a noticeable leap forward, and even then, it would be hard to break Googling habits.