Remember the days when MTV actually centered its content around music? When there was less Real World and Carson Daly and more music videos and MTV news breaks with Kurt Loder? If you don’t, you’ll have to take my word for it: For those that care about music, MTV didn’t used to suck.

But MTV, along with the major labels, stared the realities of the internet in the face and sent their concern for music fans into the sewer. So far, little has arisen to take their place. But when LA’s myAWOL (my Artists Without Labels) launches in the fall of this year, that may change. myAWOL is simultaneously a music-centric multimedia content company, a vehicle for discovering, promoting and capitalizing on musical talent, and a resource for anyone in the music industry looking to make money doing what they love. It’s part old school MTV and part new school record label, with servings of event promotion thrown in for good measure.

The experience is centered around 90-second video clips that feature video bloggers highlighting news, introducing new featured artists, and pointing out places to click to get more information or buy a few tracks. For unsigned artists, the company offers a range of free tools and documents for navigating the business. These include a database of contract templates, a professional web-based video editing application, analytics and guides on how to build a street team, how to choose a manager and so on. Any artist can create a profile, upload content and set the price to sell music through the site.

A number of companies are trying to bring new models to digital music. Topspin Media is developing technologies to help artists market themselves. Tunecore (under the motto “sell your music not your soul”) simplifies distribution of digital music across the available channels, and Fairtilizer, whose founders are former big-label A&Rs, seeks out promising musicians, actively promotes them and gives them web-based tools to sell their music to fans. myAWOL takes elements of all of these, adds a team with deep industry experience and builds it all around high-quality content and what looks to be a very cool website. 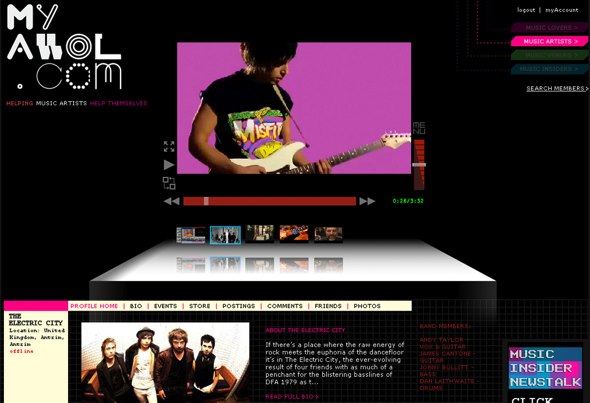 In the 90s, the company’s founder, Andy Bentley, worked in the top levels of Virgin Music and EMI’s international arm. He says that he left the industry when it decided to sue its customers, and he seems to grasp what the big four still seem incapable of grasping: big labels are obsolete. However, he argues, while the power has shifted in favor of the artist, it hasn’t gone all the way. A company with resources and savvy can still add value to artists and extract some of that value in return.

myAWOL will first stick its head out in August, when it launches the Music Industry Database (MIDB) which, yes, is music’s version of the Internet Movie Database (IMDB). Unlike the IMDB, however, it is less a consumer-facing product and more a resource for industry insiders. The idea is that anybody in the industry, ranging from make-up artists and sound engineers to executive producers and musicians, can use the MIDB to tout themselves in pursuit of the next gig. They can list everything they’ve worked on and with, upload media to show off, and widgetize the whole package to make what Bentley calls an “electronic business card.” It will offer classifieds, industry news and bimonthly podcasts with (Bentley hopes) respected authorities from across various fields in the industry.

Meanwhile, a team of talent scouts is prowling for promising musicians and signing them to non-exclusive contracts. These contracts allow the artists to sell their music anywhere they want but gives myAWOL photography, video and merchandising rights and a revenue sharing agreement for any music or merchandise sold through the company. In exchange, Vlad Lodzinski, the company’s Director of Content, will produce content to highlight the signed musicians on myAWOL.com, on TV and (possibly) for syndication across YouTube and the like. (Lodzinksi spent years localizing MTV stations across European markets.) Signed artists will also get access to Bentley and Lodzinski’s wide ranging industry connections and a number of major concert venues.

From the tidbits I’ve seen of  myAWOL.com, it looks impressive. Of course, we’ll have to wait and see if Bentley and his team manage to follow through on the full package. Content production is a risky business, MySpace is entrenched as the go-to company for musician’s profiles. Buzznet, a social network intended to help musicians directly engage their audience, grew furiously for awhile but seems to be losing traction fast. It’s also not yet clear that building a business around selling digital music is a good idea. While big name artists like Radiohead and Nine Inch Nails have made big splashes by abandoning their labels and selling direct, smaller bands are having a harder time.

But Bentley has been around, seems to have thought through these issues and may actually maneuver them. I walked away from the interview with the sense that I had seen something big. It struck me that myAWOL is what MySpace might have been if it stayed focused on music: a fully-realized platform for the next generation of musicians, a music company that actually has a clue about the way things work in the iPod age.

The company has raised over $2 million in seed capital and is looking to raise $8-10 million more.