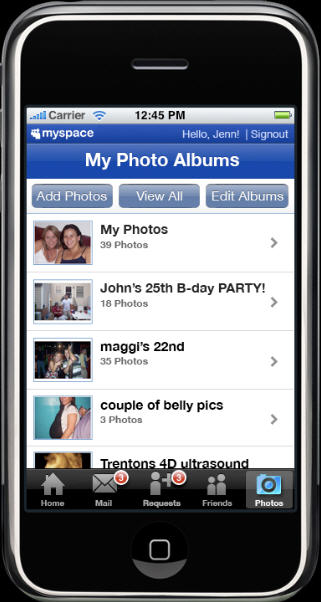 MySpace, the big social network that is vying with Facebook for top-dog status globally, has released a mobile version of its site designed especially for the iPhone.

MySpace has also released new statistics revealing explosive growth among mobile users: Page views of the company’s mobile site appear to have more than doubled between March and June.

Traffic blasted past 2.5 billion page views in May, from 1.4 billion in March. John Faith, MySpace’s general manger and vice president of mobile, said in an interview he expects the 3 billion number to be broken when June stats are in. That’s impressive, because the company had originally forecast to reach 3 billion by August: “We’ll blow through that, we’re seeing astounding exponential growth.”

While the iPhone still has a small overall market share among phone users, the phone is significant because its full screen and other features such as location and touch technology allow people to browse and interact more easily and fully than other phones.

Facebook is offering its own application at the iPhone App Store.

Here are some of the main features of the MySpace application. MySpace said a key feature was the ability to upload photos directly from the iPhone to your MySpace profile:

— Camera integration and optimized photo management allowing users to snap, sort and upload pictures anytime and anywhere.
— The ability to stay connected with friends through a full messaging interface.
— Pinch, flick and swipe your way through the MySpace navigation using standard iPhone touch support.
— Real-time friend, status and mood updates.
— Feedback mechanism letting users contribute to future iterations of the product.
— Available in 12 languages by the end of this month.

Other traffic numbers:
— Projected usage to hit 3 to 5 million unique global users per day by the end of 2008.
— 1.7 million daily unique users in the US (from internal metrics) on MySpace Mobile WAP.
— 1.4 million monthly unique users across Europe (from internal metrics) on MySpace Mobile WAP and growing rapidly.
— North America, Europe and Australia are the heaviest users with additional growth coming from other regions.

MySpace is working with all major mobile operators as well as major manufacturers including Nokia and Samsung who have built their own custom communities based on MySpace. MySpace Mobile has 27 signed carrier/operator deals in 20 countries globally.

General Stats about MySpace:
· MySpace has nearly 115 million monthly active users around the globe (May Comscore)
· MySpace is the United States’ most trafficked site on the internet
· 85 percent of MySpace users are of voting age (18 or older)
· 25 percent of Americans are on MySpace, in the UK it’s as common to have a MySpace page as it is to own a dog
· On average 300,000 new people sign up to MySpace every day