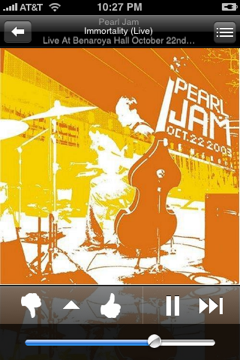 I have a confession to make: I haven’t listened to the radio in months. I’m fine with that, I have plenty of music on my various mp3 players, but it becomes problematic when I’m in the mood for new music. There are great online tools for this such as Muxtape and even iTunes music recommendations, but I often feel like something new when I’m on the go.

Enter two new brilliant apps for the iPhone and iPod Touch, Pandora and AOL Radio. Both services, available for free through Apple’s new App Store, take music discovery on mobile devices to the next level. While services have been around for a while that will tell you an artist’s name and track title, none do it quite as easily as these two apps do all on one device. Sure, some satellite radio receivers offer this, but you pay for that privilege.

I’ve long been a huge fan of Pandora, a service that asks you to input music you like and gives you new recommendations based on technology it calls its “music genome project.” The problem with Pandora is that you had to be chained to a computer to use it. Not anymore.

This is the early frontrunner for my favorite iPhone app. You simply sign in and if you’re a previous user of the site, it has all the stations you’ve created right there. Simply click on one to start playing new music just as you would on the desktop. If you’re a new user or wish to create a new music channel, that is just as easy. Simply enter an artist, song or composer and it will build a new station for you.

My favorite feature is “QuickMix,” which lets you shuffle through random samplings from all of your stations.

Just as with the web version, you can give “thumbs up” or “thumbs down” ratings to songs, which will help determine what music Pandora should play for you. The app also lets you bookmark artists or songs so you can recall them later. 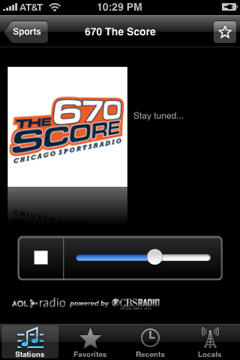 And those users who are aesthetically inclined will be happy to know that album artwork is available as well. In fact, the app looks a lot like the iPod app on the iPhone itself.

AOL Radio, made in partnership with CBS Radio, isn’t quite as pretty as Pandora, but it’s arguably easier to use. Simply download the app, pick a genre of music and load up one of their insane amount of radio stations from both the internet and across the country.

Just as with Pandora, you’ll get the artist and song name for every track you play. This information is saved under “Recents,” so you can find songs you had liked and you can bookmark these songs as well. You can also favorite certain stations.

What’s great about this app is that sports and talk radio are included as well. Unfortunately, commercials are included just as with regular radio.

One of the killer features (at least for Apple) of both of these apps is that you can, with the touch of one button, find the music you are listening to on iTunes. It launches directly into the iPhone/iPod Touch iTunes app and takes you to that song/artist.

That noise Apple hears is “cha-ching.”