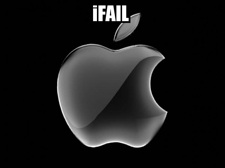 Regular readers may know my proclivity towards Apple products. Hell, some might call me a “fanboy.” That makes what I’m about to tell you very troublesome. Ladies and gentleman, today Apple (possibly by way of AT&T) failed. Badly.

The launch of the iPhone 3G is well underway — except if you happen to live in the Pacific time zone of the United States. If you do, there’s a pretty good chance your brand new iPhone 3G is not working yet. Far worse is that a lot of users out there with old iPhones who tried to update to the 2.0 software this morning may have bricked (broken) iPhones as well.

The problem is with the AT&T activation process — which Apple and AT&T now require that you do in store. Big mistake. Whether it was due to high demand or a simple failure of the system, something went wrong and as of the time I left the Apple store this morning at 9:45AM — nearly two hours after it opened — my brand new iPhone was still not activated.

All of us customers with the bricked iPhones are being asked to try again later this afternoon. That may not sound unreasonable except that I can tell you from first hand experience that this is a canned answer. Apple seems to have no idea what is going on.

Here’s how it went down:

The very first person in line (who had camped out for days) came storming out of the store very upset. His iPhone simply could not be activated (see the video below). A friend of mine, Matthew Levine, then came over to explain that he had tried to upgrade his old iPhone to the 2.0 software in the morning, and it rendered his iPhone unusable (this is also in the video below, though the audio seems to have failed for some reason):

Shortly thereafter, Apple seemed to have corrected the system for some. One man walked out with a working iPhone (see the video below):

I was in the second wave of customers (about the 30th person in line throughout the night) allowed to enter the store. It was clear immediately that things were still very wrong. In the video below, blogger Robert Scoble storms out of the store after failing to secure a phone (see the video below):

I purchased an iPhone shortly after him. The first troublesome sign? The credit card machine didn’t work. Fair enough, sometimes these things break. It had to be done manually (you know, the old carbon-copy method).

I was then taken downstairs to activate my new iPhone. Four employees tried and failed to do so on two different machines. Different error messages popped up every time. No one had a clue what the problem was.

I was handed my iPhone and told to try again “later” at home. That was annoying since I had just waited for over nine hours in line, but hey, maybe this is the price of early adoption, right?

I decided to buy a protector for the phone before I left. Another employee tried to use his credit card machine. It failed as well. It’s almost like Skynet from Terminator 2 was systematically attacking the Apple store.

I left the store with an iPhone, but it’s not activated. I just tried again right now, it’s still not working.

This is such a failure that I almost want to go conspiracy theorist and postulate the perhaps Apple is making this process fail on purpose so it can initiate some sort of opt-out clause of its deal with AT&T and thus spread the iPhone to other carriers. Such a move could very well lead to Apple taking over the carrier industry in the United States similar to how it took over the music industry.

If this is in fact AT&T’s fault (and that is not yet clear), Apple should walk away right now. AT&T also failed them last year with aspects of the activation process, including the transfer of numbers.

As I left the store, a bunch of people asked me what was going on. Nearly an hour after I went in, I had an iPhone but it was not working. Worse is that Apple thought this process for activation would only take 15 minutes and that lines would move quickly. Watch the video below, I hate to say it, but those people at the back of the line aren’t getting iPhones today. Not because Apple will run out, but because the activation process will consume the entire day.

I’m sure this issue will eventually be resolved, but in terms of successful launches, this will not go down as one of them. I mean, did that seriously just happen, Apple? I thought we were friends.

For those dying for more, we have a ton of videos from the night here.

update: After several hours I was eventually able to connect via iTunes and activate my new iPhone 3G. I used it for a while and it worked great. Unfortunately, I just went to plug it in to charge and iTunes asked me to register — again — and wiped out all the data on my phone. Problems persist.

There are also reports that the iPod Touch 2.0 update is still not working for some people.

(And sorry to Microsoft for the potshot in video one above on Vista. I made all those videos on a Windows Mobile device and it worked great throughout the night (except for the sound). Certainly it worked better than my iPhone 3G currently does.)