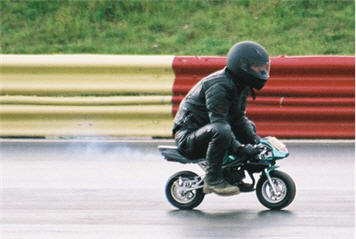 [Editor’s Note: Silicon Valley venture firms and technology companies have been active in China for years, but with mixed results. Domestic search company Baidu has beat out Google for much of the market, local social networks like tencent.com and Xiaonei appear to have the upper hand over international competitors like MySpace and Facebook. Similar trends can be seen across most segments of online Chinese markets. Where does that leave e-commerce in the country? George Godula, Markus Fuhrmann and Michael Hohenwarter, from a China based market expansion service provider called  Web2Asia, have been studying the question. This is the first in a three-post series from them on the state of the internet market in China.]

Disclosure: Web2Asia. recently paid for VentureBeat to visit China and meet some of these companies first-hand.

China has the largest internet population in the world — its 230 million users nearly equals the size of the entire U.S. population. If last year is any indication, the number of Chinese users will continue to rise quickly: In 2007, the number of users increased by 73 million to 210 million, representing a growth rate of 53.3 percent, according to the China Internet Network Information Center (CNNIC).

Driven by breakneck economic development, web access is quickly coming to more and more of the country’s 1.3 billion people — and traffic to e-commerce sites is booming (even if transactions aren’t — more on that shortly).

But don’t let those numbers fool you. Even though internet use is spreading quickly, the current penetration rate of 16 percent is still 3.1 percentage points lower than the world average of 19.1 percent and far below advanced internet nations such as Norway (88 percent), the U.S. (71.7 percent), South Korea (71.2 percent), and Germany (64.6 percent). In metropolises like Beijing and Shanghai, however, the penetration rate reaches almost 50 percent.

The tremendous growth in user numbers cited by the CNNIC is also largely due to many new connections in rural areas. In 2007 the growth rate in rural areas even exceeded the 100 percent mark, reaching 127.7 percent. By the end of 2007 rural internet users amounted to 52.65 million, and out of all new users last year, 40 percent, or 29.17 million, are from rural areas, according to the CNNIC. 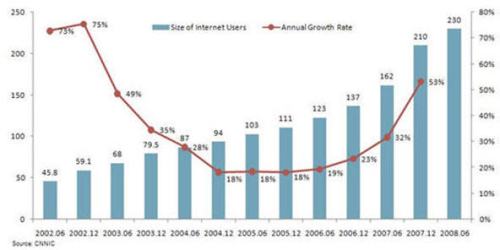 The internet is used differently in China than in the U.S. and Europe. The following applications are rated according to their popularity in descending order based on a January report by the CNNIC

The popularity of music, videos and games demonstrates the entertainment function of the internet in China. Online music and instant messaging are especially interesting to people with a lower educational background, according to the CNNIC, which could explain the huge increase in the number of users in rural areas.

As we indicated above, though, growing internet traffic in China hasn’t resulted in growing e-commerce. A brand new CNNIC report issued at the end of June, which covers 19 economically developed cities and provides the most authoritative figures on e-commerce in recent years, shows that only 25 percent of Chinese internet users shop online. In comparison, up to 80 percent of U.S. and European internet users purchase goods over the internet.

Another interesting observation is that the longer users have had access to the internet, the higher their online shopping rate is. For example, 42.4 percent of all users who had access to the internet before 1999 shop online, while the rate among users who discovered the online world after 2007 reaches only 5.7 percent. This is the main reason why the online shopping rate in tier-one cities is significantly higher than in the rest of China.

The numbers, of course, are going up. According to the annual China Internet Research Center (iResearch) report, last year 55 million Chinese internet users shopped online for a total of $8.25 billion (including consumer-to-consumer and business-to-consumer transaction volume, excluding online travel bookings). This represents an increase of $4.3 billion over 2006, and the report projected that online spending will reach $58.5 billion in 2011.

In the first quarter of 2008, China’s online shopping transactions amounted to $3.46 billion, which means a 151.8 percent year-over-year increase. The number of online shoppers is expected to hit 75 million at the end of the year.

Online shoppers have accepted online shopping as a regular internet application. However, major obstacles limiting growth in Chinese e-commerce remain, including a lack of trust in online payment systems, a fear of credit card and online sales fraud, and a fear of website ID information theft. Also a factor is a widespread problem of counterfeit goods. Nevertheless, the rapid growth of internet penetration and e-commerce in China is proof that online behavior can change quickly.

79.7 percent of online shoppers in the major 19 Chinese cities did not encounter any unpleasant experiences, according to the latest CNNIC report. Users who already encountered a negative experience say that it was related to one of two main problems — quality and logistics. Users complain that the delivered products sometimes do not match the picture in the product description, are fake or are damaged on delivery. Concerning logistics, shoppers complain mainly about overly long delivery times. A strengthened logistics management system could increase customer satisfaction substantially.

Online shoppers in the major urban areas also largely adopted electronic means of payment when purchasing goods online. 71.3 percent of shoppers use electronic payment forms when purchasing goods online. Cash on delivery is still very popular with 35.7 percent of users claiming that they make use of this payment form. Some 14.7 percent of online shoppers made use of postal money orders. Among the means of electronic payment 76.2 percent of online shoppers use Alipay, a third-party payment solution (“China’s PayPal“). 32.5 percent state they pay via e-bank accounts, and 11.6 percent claim to pay by credit card. Alipay’s western counterpart, PayPal, is only used by 0.8 percent of online shoppers who pay electronically. Credit card use is still very underdeveloped in China, and by the end of 2007 only 70 million credit cards had been issued, according to the People’s Bank of China. Similarly, western payment services such as PayPal are far less popular than local provider Alipay. The most striking difference in payments, however, is the high use of cash on delivery for e-commerce payments in China — labor is still so inexpensive that many strong local providers can afford huge workforces for delivery and payment collection.

George Godula is managing director of MH | direkt Asia Co. and founder of Web2Asia. Markus Fuhrmann is cofounder of Web2Asia Michael Hohenwarter is research analyst at Web2Asia. MH | direkt is an international direct marketing and fulfillment provider that established Web2Asia in 2008 to support Western internet and e-commerce companies in their expansion into China, Korea and Japan.