Medialets, a startup focused solely on providing ads for applications running on the iPhone, is publishing some early metrics about Apple’s recently launched App Store. Some key findings:

Average Prices for Apps Are Falling

Tracking both the number of apps and their average price, the team found that as more competitors move into the App Store, prices for applications are dropping. On Friday, the average price for an app was $4.65, but by Sunday (after nearly a hundred more apps became available) the average price had dropped to $4.25. Paid-for apps dropped in average price to $5.47 on Sunday from a high of $6.03 on Friday. (All charts and graphs are taken from the Medialets blog.) 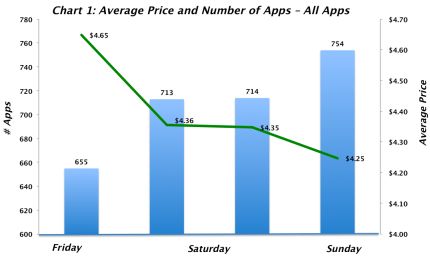 By tracking reviews of both paid-for apps and free apps, Medialets determined that free apps were not only receiving about 25 percent more reviews than their paid-for counterparts, but that the reviews were generally more favorable. On the five-point rating scale, free apps generally ran about a quarter of a point ahead of paid apps.

Some App Developers Are Gaming the System

Call it the Yellow Books Method. Due to a weakness in how Apple alphabetizes in the App Store, app developers have realized that symbols list first when users are browsing. Thus, we’re seeing a proliferation of apps with symbols in front of their name, such as !! Solitaire City !! or !FLOverload!. Apple has yet to respond to this weakness.

I also talked for a bit with Medialets CEO Eric Litman about the company as a whole. Founded on June 1 and up and running with 14 employees, Medialets is looking to support mobile apps with advertising, first on the iPhone and eventually on other platforms as well. Developers use the Medialets SDK to drop a bit of code into their program, and Medialets sets up a back-end system that rotates ads through, with the Medialets ad server delivering more ads when it detects the user has a connection. The company will also provide analytics to both advertisers and developers. Advertisers will be able to see how their campaign is running, while developers will be able to see how users are interacting with their apps.

There aren’t any Medialets-supported apps in the App Store yet. Litman says the company is working to develop several branded applications and hopes to have them in the App Store “within the next few weeks. It takes time to get it right. We’ll probably see others in the market that will look to take shortcuts. They’ll try to replicate the Cost Per Click model of the web, but I don’t think that will have much traction.”

Acknowledging that the mobile advertising market has been a tough nut to crack, he argues that the App Store is a game changer. “Apple is the first mobile platform that finally figured out to grow a real ecosystem. You need a central point of distribution, and you need payment baked in.” He notes that Google has already announced a similar scheme for its Android platform and expects to see Microsoft and Nokia announce their own versions of the App Store within the next 12 to 24 months.

Apple will take no cut of the ad revenue Medialets will be generating. Litman says Apple’s response to Medialets has been “enthusiatic.” Perhaps Litman’s time working at NeXT, the company Steve Jobs started after leaving Apple and then sold back to Apple, helps, but he’s quick to downplay the connection. “I worked for NeXT years ago as a junior assistant to the guy who knew the other guy who did something important. That’s the extent of it. I knew Steve beyond my time at NeXT only because his wife’s brother worked for me, and even that was cursory.”