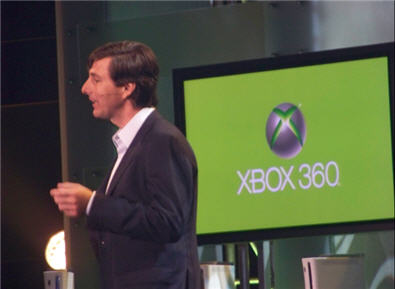 Here’s an updated view of the Microsoft press conference. Summary: Microsoft made progress tearing down the old Sony hegemony, but it’s not chipping away much at Nintendo’s newfound dominance.

And it cooked up a deal to hurt Apple, as fellow VentureBeat writer MG Siegler has noted, by getting Netflix to make its movies and user queues available on Xbox Live as downloadable movies. But the Microsoft games that are focused on Nintendo’s broader market audience — for casual gamers — aren’t going to hurt Nintendo all that much. One title, Lips, has a motion-sensitive microphone. But there is no motion-sensitive controller for the Xbox 360, as was rumored. And there were no Halo games announced (a disappointment).

We’re live inside the LA Convention Center where Microsoft has bathed a big ballroom in acid green Xbox lighting. The press is piling in. They’re running a “street talk” video on gamers and how they talk and what they like. Do we all know what “pwned” means? (owned, getting beat or beating someone).

Don Mattrick, head of the Xbox business at Microsoft (and pictured above), took the stage briefly to mention Microsoft’s big titles and introduce a video clip of them. Well, Microsoft knows its audience, as it has now gone into a demo of the hardcore and bloody “Fallout 3” action-role-playing-game/shooter from Bethesda Softworks. We’re just a couple of minutes into it and the body parts are flying, thanks to weapons like the “fat man gun,” which lobs a big bomb at enemies in slow motion. The first live demo of the game will have exclusive downloadable content for the Xbox 360. The flying body parts are non-exclusive.

Next up: online quad gamer play in “Resident Evil 5” from Capcom. This game is set in Africa and for the first time you can team up with others in online play as you slay hundreds of zombie-like monsters. But too bad. This game slipped until March 13, 2009.

And then comes the eloquent Peter Molyneux of Microsoft’s Lionhead Studios, who says that “Fable 2” is now finished. Fable 2 will be out in October. It’s a role-playing game and a sequel to an Xbox hit that sold millions. A new feature that Molyneux described is the ability to meet others in online play and invite them into your game party easily, inside the game, with no Xbox Live matchmaking screens.

Cliff “CliffyB” Blezinski of Epic Games is showing off “Gears of War 2,” where you can pick up a dead Locust body and use it as a human shield. But watch out for the flamethrowers. There is a new “five-player” cooperative mode. It will be available Nov. 7. They got some “whoops” out of the audience on that one.

Mattrick says that Xbox Live now has 12 million members, up from 6 million a year ago. And since 2005, it has generated more than $1 billion in revenues. There are 10,000 movies and TV shows on Xbox Live now. NBC is joining today, adding its TV shows such as “Heroes” to the Xbox Live marketplace for downloading. Universal is also adding its movies, as are Constantin Film and MGM.

John Schappert, corporate vice president at Microsoft and head of Xbox Live, software, and services, has taken the stage to talk about “innovation in social services.” Um, the gamer kind, that is. Schappert has confirmed the rumor that Microsoft will now have avatar characters for Xbox Live gamers. These “Mii-like” avatars are customizable with hairdos, clothes, etc.

There have been more than one million downloads of free game development tools. Microsoft is preparing to launch Xbox Live user-generated community games in the fall. And Schappert says that Netflix movies and queue lists will now be available on Xbox Live, doubling the number of movies available. You can now share your movie queue with your friends.

Shane Kim, the business development chief at Xbox, says that 1,000 new titles will launch by the end of 2008 for the Xbox 360. One new offering is the downloadable content for “Grand Theft Auto IV.” But Kim says there are titles for broader audiences too, like “You’re in the Movies.” In that title, you can get yourself into your own campy movies, using an Xbox Live webcam to record live video.

On average, 3.5 million songs are downloaded every month. One of the reasons is Guitar Hero. There’s a new version of that game coming from Red Octane, “Guitar Hero World Tour.” The Lips karaoke/sing-along title rumor turned out to be true, as a singer is ably demonstrating on stage now.