As of last night there were 802 total applications available in Apple’s App Store for the iPhone and iPod Touch. Of those, 393 or a full 49 percent were classified in either the “Games” or “Entertainment” categories, according to data put together by Medialets.

Some other interesting data as illustrated in the chart below shows that 22.7 percent of all apps are free, with another 23.8 percent costing just $0.99. Only 5.6 percent are selling over the $9.99 mark.

Medialets is focused on providing ads for applications running on the iPhone and gathering metrics. They also have a great breakdown of the top apps by several metrics including paid/non-paid, rating and price. Find that chart here. 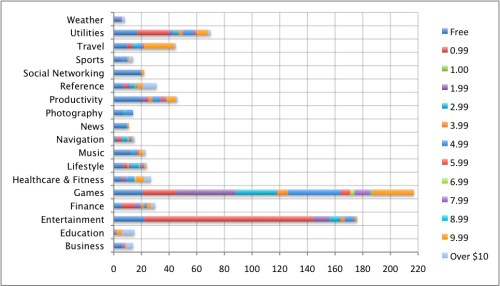