The Apple App Store for the iPhone and iPod Touch is like the gift that keeps on giving. Everyday more and more apps are being added — and get this: Some are actually good — or at the very least entertaining.

Tonight I’ve found three new ones that caught my fancy.

Will Ferrell fans from his Saturday Night Live days will understand this immediately. Those who aren’t will not — watch this video.

Included in this app is a Christopher Walken voice-over proclaiming “I’ve gotta have more cowbell.” After that, you simply go to town.

This app works much like Twittervision on the computer. It jumps around the world showing you who is tweeting (a Twitter message) what, when. You can also sync your Twitter account from with it to directly update right from the app. It can also send your location information.

The best part is the “Local” area which shows you the tweets going out around you.

It took me a while to figure out that you have to use the two finger multi-touch capabilities of the device to get anything to show up on screen. Once I got that, I saw that this photo editor is actually a promotion for the film The Dark Knight which opens on Friday.

What’s cool is that you can either take a picture or use one you already have on your device and paint it with Joker-style graffiti just like some of the film’s movie posters (see below). You can then easily email these photos to friends from within the app.

Expect a lot more of these promotional tool apps in the future. 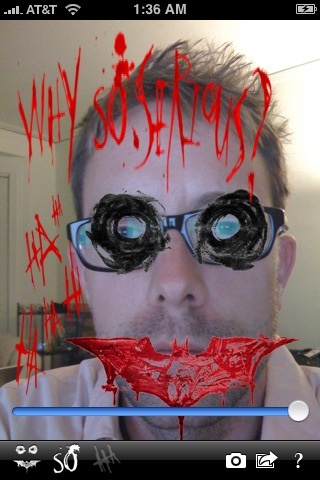