While it’s hardly a surprise that games are popular in Apple’s new App Store for the iPhone and iPod Touch, it is surprising how good many of them are. Unfortunately, many of the good ones will also cost you anywhere from $5 to $15. There is one game that I’ve been playing the past two days that stands out above all others: Aurora Feint The Beginning. And get this: It’s free.

Aurora Feint can perhaps best described as Tetris/Columns/Bejewled meets a role playing game (RPG). If that makes no sense or sounds incredibly lame, that’s just my words doing it injustice. Skip to the video below.

You score points in the game by aligning blocks with the same symbol (and color) in a row of at least three. Once you do that, the row will disappear and give you points. Just as with the other games mentioned above, if you let the blocks reach the top of the screen, it’s game over. 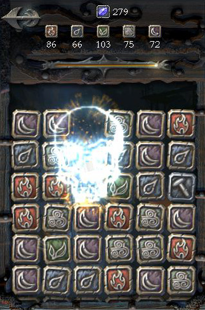 Thankfully the game is forgiving to new players and will let you keep going even if you mess up. It can take a few minutes to get into the swing of things. This is especially true considering the games use of the accelerometer as well as the touch screen. For example, if you tilt the screen to be in landscape mode, you can move the blocks differently than in the regular upright mode.

The most interesting part of the game may be that as you accumulate points you get to buy certain “power-ups.” This is where the RPG element comes in. As you accumulate enough points in the “Mine” (where you play the game), you can pick and choose which power-ups to get.

You can also see your friends’ characters/profiles within the game if they allow you to.

I’m not going to lie. I’m not a huge RPG guy, but maybe this game will get me into the genre.

About the only bad thing I can say about the game is its unfortunately long loading screen to start up. It says that it will take “about 30 seconds” to load and sometimes that is true, but often times it’s much faster. Compared to some of the loading screens on recent games for the Xbox 360 and Playstation 3 gaming consoles, this is nothing.

Developers Danielle Cassley and Jason Citron note on the game’s page in iTunes that Aurora Feint The Beginning is just the first chapter of what will be a larger massively multiplayer online game (MMO) for the iPhone. It’s off to a great start.

Did I mention the game is free? Yeah, go get it.

You can find it here (this link will open iTunes).