Despite the dreary economic climate, venture investments held relatively steady in the second quarter of 2008. But more of that money is going to later-stage deals, not funding young startups.

Venture firms invested a total of $7.4 billion in 990 deals during April, May and June of this year, according to the latest MoneyTree Report from PricewaterhouseCoopers and the National Venture Capital Association. Although that’s well below the peak of $8.1 billion invested in Q4 2007, it’s only a slight drop from the $7.5 billion of funding in Q1, and the similar amount to the same period last year.

Not that VCs aren’t affected by the rather inhospitable market for IPOs and acquisitions — if you have a quarter without a single IPO, that’s going to have consequences. In this case, it means more venture dollars are needed to keep later-stage startups going as they wait for the exit environment to improve. That’s why later-stage funding rose 15 percent, to $3.8 billion, while first-time investments fell 12 percent, to $1.6 billion.

So why hasn’t venture investment taken a bigger drop? In the report press release, NVCA President Mark Heesen argues that venture firms are taking the longer view and betting that their portfolio companies can weather a temporary downturn. I certainly hope that’s the case, although the dearth of first-time deals doesn’t seem like long-term thinking to me. (Venture firms are benefiting themselves from investors with a long-term view — they actually saw an increase in fundraising during Q2.)

The software industry received the most investment, with $1.25 billion going to 219 deals. But its prominence is waning — software is down substantially from the $1.56 billion invested during the same period last year. Industrial/energy companies, on the other hand, are on the rise, placing second among the industries with $1.15 billion of funding, more than double the $571 million invested in Q2 2007. 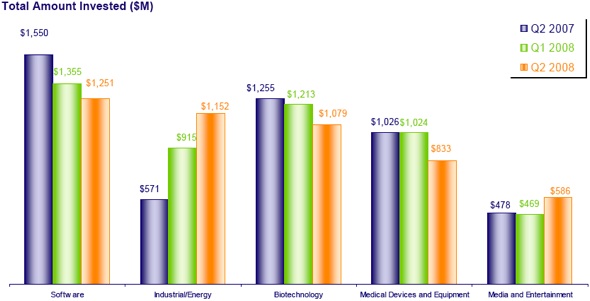 The data for the report comes from Thomson Reuters.